Born in 1925, Anatoly Nikolaevich Tumbasov was largely influenced by the 1930s growing up. Throughout the 1930s, many political ideologies such as Marxist Socialism, Capitalist Democracy, and the Totalitarianism of both Communism and Fascism were engaged in struggles for dominance, and characterised the political atmosphere of the era. In the Soviet Union, Stalin’s government was in dire need of urgent funds to implement the industrialisation of the Five Year Plan. In a covert bid to acquire funds, the government proposed to sell off assets from the State Hermitage Museum in Leningrad (St. Petersburg), which included some two hundred and fifty paintings by the Old Masters, a number of which had been deemed irreplaceable. Many of the pieces came to be owned by Andrew Mellon, via the New York based art dealing company, Knoedler. In the United States, the Great Depression had a severe impact on artistic output, and artists began to focus on the idea of humility and of the ordinary man on the streets. The focus of art in the United States also began to take a more political turn for the first time, and artists used these topics and ideas to try to impact society. Themes such as poverty, lack of affordable housing, anti-lynching, anti-fascism, and workers' strikes became prevalent in the work of many artists. In Europe, Surrealism continued to be prevail, and had grown to have influence worldwide. Leading artists took the ideas posed by Surrealism and incorporated them into their radical political philosophies, creating a new kind of magic realism. This was exemplified in the work of artists such as Frida Kahlo and Diego Riviera in Mexico. By the end of the decade, the Second World War had begun, having been aided by Adolf Hitler’s rise to power in Germany in 1933. This political furore would go on to preoccupy both artists and the worldwide population.

1 artwork for sale by Anatoli Tumbasov 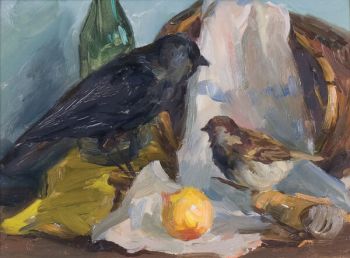