It's not often when I'm making a biography that I think it's like a movie or adventure novel. While many artists are anything but boring. André Lasserre has been through quite a bit, besides being an artist he was also a bon vivant, communist, spy and resistance fighter, prisoner and exile. It's impressive, I've tried to keep it short. André Lasserre (Veyrier, Switzerland 1902-... Read more

It's not often when I'm making a biography that I think it's like a movie or adventure novel. While many artists are anything but boring.

André Lasserre has been through quite a bit, besides being an artist he was also a bon vivant, communist, spy and resistance fighter, prisoner and exile. It's impressive, I've tried to keep it short.

He trained as an architect (1917-1918) where he was a student of Robert Mallet-Stevens and Auguste Perret. Still, it wasn't what he wanted. In 1918 he therefore entered the École Nationale Supérieure des Beaux-Arts, although the training was very classical and focused on the Renaissance and Antiquity. After a year, he decided to quit and become an apprentice at an architectural firm.

After two years it was clear to him that his heart was in art and he then successfully attended the more modern Academie de la Grande Chaumière (1921-1925), where he was a student of the sculptor Antoine Bourdelle. There he also met his wife Suzanne Walhart.

He was very attracted to the animalists, the sculptors and painters who want to capture animals in their drawings, paintings and sculptures. In the morning he worked in the Jardin des Plantes (zoo) and in the afternoon his drawings were executed in stone, wood, plaster, ceramic or bronze in his studio. Lasserre lived and worked in Montparnasse, in 1926 he had his 1st solo exhibition in the gallery of Léopold Zborowski, who was very interested in his work. He exhibits regularly. In 1928 he really made a name for himself as an animalist, his drawings and sculptures are appreciated by art critics and a special catalog is also published.

André Lasserre was completely absorbed in the art world of the Montparnasse in the 1920s, he joins a group of artists, he becomes good friends with André Derain, Elie Faure, Georges Malkine, but also Moïse Kisling and Pablo Picasso appear regularly in his diaries and correspondence. There is a famous photo of Man Ray where Lasserre poses with George and Yvette Malkine, André de la Rivière and Robert Desnos.

At the end of 1928 he falls in love with the actress and dancer Lena Amsel, she tragically dies a year later in an improvised car race between Lena Amsel's Bugatti and André Derain's.

In the same year the financial crisis heralds a difficult time for Lasserre, when Zborowski also dies in 1932, his situation is very difficult. Fortunately, he gets support from good friends and he can also exhibit at Hébrard.

Divorced, he remarries in 1931 to Juliette Ziegert, a German photographer and Germaine Krull's assistant at Maria Eisner's Alliance-photo studio.

During a trip to Bremen in 1934, to visit his wife's family, they come into contact with Nazism and its influence on everyday life. On their return to Paris, they join the Society of Revolutionary Writers and Artists. The association is close to the Communist Party. Lasserre is very active, demonstrates, among other things, at the large demonstration at Père Lachaise in May 1936. He also works on the monument to Paul Lafargue (1936), the monument is destroyed again in 1940.
Since their visit to Bremen, the couple has also been monitored by the security service, including through their connections with the Alliance-photo studio. At the beginning of 1940 they both received the French Nationality.

In 1939 the Communist Party was banned, but both continued their activities. In April 1940 their house is searched and both arrested, they are accused of providing and trading Swiss passports for fellow communists and treason, they are also said to have found a military map. Both ended up in the military prison in Toulon, the Swiss vice consul and his wife, who had indeed provided documents to Lasserre, are arrested. The documents were intended for Jewish communists in Eastern Europe so that they could flee to Switzerland.
Switzerland does not give any support, but condemns this action and the Lasserre couple is even stripped of Swiss nationality. Their French nationality is also taken from them.

The Vichy regime was now a fact, they are both sentenced to the death penalty and handed over to the German authorities in 1941 and eventually end up with the Gestapo in Paris. Later, this judgment was converted into lifelong forced labour, partly through the intervention of the Swiss government, which eventually also repatriated the Swiss vice-consul and his wife to Switzerland. However, this does not apply to Lasserre and his wife. His wife's German family, learns of their circumstances, and his wife's brother, officer of the Whermacht, arranges for them to be transferred by a friendly relation to Germany (Bavaria) where they can move relatively freely, albeit under supervision. But Lasserre does not sit still and he becomes connected with a movement (KDP) that encourages soldiers to desert and provides aid to prisoners of war.
In October 1943 he has to perform forced labor, he comes into contact with French prisoners of war, and he carries out acts of sabotage, in addition, they both participate in a network for the placement of Jewish people in hiding and they take in a Canadian airman.

Lasserre wants to flee Germany to join the Maquis (French resistance). One of his brothers-in-law threatens to shoot him if he goes. Finally, he is betrayed and ends up in a cell at the Gestapo in Munich in February 1945. After a bombing raid on the prison, he is sent to Dachau, along with other prisoners, on foot.
He finally arrives in Dachau, 6 days before the liberation. He helps the US forces there for some time, he was well informed, and then goes in search of his relatives.

On his return to Paris, he is immediately arrested because he has not yet served his sentence. Initially he was released, but later he was still charged with counter-espionage. During the trial many people testified for Lasserre, such as people from the resistance, including the sculptor René Ichi, Denise Thiel and Father Riquet and German Jewish people in hiding, people of the German KDP, and fellow saboteurs.

Yet he is imprisoned again, near Marseille. There are special actions to get him released, but it is not until 1950 that Switzerland decides to help him and give him back his nationality. He is finally released in 1951, he has to leave France for good and settle in Switzerland.

He returns to work in Switzerland, joins the artists' group l'Oeuvre and is part of a fund for arts and letters. He remarries, from this marriage come two more children. He never got involved in politics again.

His work has also changed drastically, his sculptures are abstract, he is intrigued by nature, but on a micro level, its structures and shapes. In 1954 he received the 1st Prix de l'ECU du Tir Fédéral in Lausanne. He receives several commissions for public space and he also designed tokens and coins, including for the Swiss bank and Israeli bank.

1 artwork for sale by André Lasserre 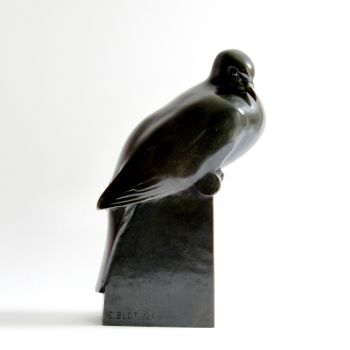 1 Artwork from this artist
54 artworks34 artists
1 - 1 / 1
We use cookies to provide statistics that help us give you the best experience of our site. By using this site without changing your cookie settings, you are agreeing to our use of cookies.
Cookie settingsAllow cookies