André Lavrillier was born on May 7, 1885 in Paris. His father was a steel engraver. Lavrillier was a student at the École des Beaux-Arts in Paris from 1905 to 1914, his mentors were Jules Chaplain, Frédéric de Vernon and Auguste Patey. In 1911 he received the Premier second Prix de Rome and in 1912 the Prix Stillman.In 1914 he won the Grand Prix de Rome. That... Read more

André Lavrillier was born on May 7, 1885 in Paris. His father was a steel engraver.

Lavrillier was a student at the École des Beaux-Arts in Paris from 1905 to 1914, his mentors were Jules Chaplain, Frédéric de Vernon and Auguste Patey.

In 1911 he received the Premier second Prix de Rome and in 1912 the Prix Stillman.
In 1914 he won the Grand Prix de Rome. That includes staying at Villa Medicis in Rome for a few years. In the meantime, WWI had also broken out and he was mobilized. He served in the French army from 1914-1918. First as a liaison officer with the 74th Infantry at Le Marne, close to Verdun under General Berthelot. He sees his talent as a draftsman and he is transferred to the Air Force as a photographer.
During his military service, he drew the portrait of Marshal Petain and Marshal Foch at their request. After the war, medals were made from these portraits in 1920.

After his years of service, he volunteered to join the Romanian front in 1919.
After the Peace of Romania, he is noticed by Queen Marie of Romania who gives him a position as professor at the Académie des Beaux-Arts in Lassy. During this period he made several portraits of the royal couple, and of other high-ranking people in Romania.

In 1921 he finally leaves for Villa de Medici where he creates his Leda and the swan. During the same period, he falls in love with the sculptress Margareta Cossaceanu who, on the recommendation of the Romanian queen, studies sculpture at the art academy in Rome. They marry each other and return to France.

During his lifetime André Lavrillier made many portraits, mostly of people of some notoriety, writers, physicians, and high-ranking dignitaries.

In 1931 he is invited by the Royal Mint in London to design a coin. In France, for example, he created the 5 franc coin that was used between 1933 and 1966. In 1950, at the invitation of the Peace Committee (Le Comité de la Paix), he converted Picasso's dove of peace into a special coin for Stockholm.

Together with his wife, he realized the Asian and Romanian Pavilion in 1935, intended for the 1937 World's Fair.

In addition to being a performing artist, he was also a member of the jury for the Concours de Rome, the 1937 World Exhibition and the l'École des Beaux-Arts in Paris.

He passed away in 1953. He and Margareta had 3 children together, all three of them followed in their parents' footsteps as photographer and painter.

His work can be found in various museums, including the Royal Mint in London, Musée d'Orsay, Museum Bucharest, Museum Medals Stockholm, Brussels and Bucharest, Cabinet des Médailles and the National Library of France.

1 artwork for sale by André Lavrillier 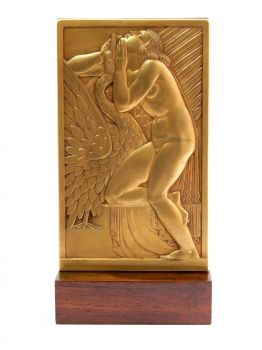