From 1916-1919 she studied at the Applied Arts School Quellinus, specializing in interior architecture and furniture art, she was a student of J.L.M. Lauweriks. Her two female fellow students were Pauline Bolken (1896-1956) and Liesbeth Menalda (1895-1997).

In 1918 her design for a bathroom was published in Quellinus' annual report, on page 7.

She also made a name for herself as an art weaver in the 1930s with her gobelin rugs, very modern at the time, and with her ties (1924), which were also exhibited at Galerie de Kerkuil, by Jo van Regteren Altena.

Corrie Formijne is known to have been a frequent theme in her oeuvre.

Unfortunately, it was difficult for women at that time to build a career as an artist, they often had to take care of a family and therefore few opportunities, they were also taken less seriously.
Corry Formijne has been active as an artist for a long time and also exhibited, for example in 1948 in Haarlem and at Galerie de Kerkuil.

1 artwork for sale by Corry Formijne 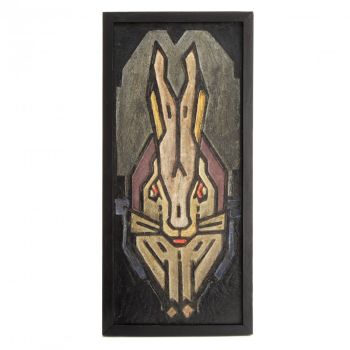