François-Emile Décorchemont (France, 1880-1971), he was born in an artistic family where both parents were visual artists. His father also taught at the École Nationale des Arts Decoratifs and François also trained there from 1896-1900. He also worked at home in his parents' pottery studio. He painted and made ceramics. In 1902 he became so inspired by the work in... Read more

François-Emile Décorchemont (France, 1880-1971), he was born in an artistic family where both parents were visual artists.

His father also taught at the École Nationale des Arts Decoratifs and François also trained there from 1896-1900. He also worked at home in his parents' pottery studio. He painted and made ceramics.

In 1902 he became so inspired by the work in pâte de noche of the glass artist Albert Dammouse that he also started experimenting with this difficult material.
Décorchemont mainly painted landscapes and in 1903 he made his debut at the Salon des Artistes Français with paintings and a few vases of pâte de noche. He received an honorable mention for his vases.

After this, he fully focused on working with pâte de noche and continued to experiment. These early experiments were difficult, the material is so difficult to work with and so fragile and also expensive, the kiln time can be as long as a few days. Nevertheless, he persevered and regularly exhibited at the Paris Salons, with success, receiving several awards and even a travel grant in 1908, which he gratefully used.

On his return he settled in Conches-en-Ouches. He then also started using the cire-perdue technique, (lost wax technique) whereby he tried to get the shine of precious stones on the pâte de noche. He was still experimenting, with various materials, temperatures and kiln times. Each work was polished, sometimes a motif was cut and because pâte de Verre often has irregularities such as air bubbles, large air bubbles and other irregularities were ground.

In 1910 he also managed to make transparent pâte de noche. The shapes changed depending on the technique used. Vases and bowls were thicker and often somewhat deeper in colour, his decors became slightly simpler, fish, scarabs, dragonflies, leaf and flower motifs and masks in relief.

He showed his new work at the Salon des Artistes in 1911 and in 1912 at the Salon d'Automne and immediately received the gold medal.

In 1914 Décorchemont was forced to stop all production due to the outbreak of WWI, work was not resumed until 1919. In the first years he made the same work as before the war years, he regularly incorporated masks in his designs, as a symbol of the fear of war and the serenity of peace.

During the 1920s Décorchemont's designs often became more stylized, he also started using geometric patterns. The figures were often incorporated into his handles, such as chameleons, snakes, fish and caryatids. The colors largely remained as they were, but often the glass was marbled, striped and he also made use of the many air bubbles that were created in the making process. He also started imitating turtle.

Décorchemont's fame rose rapidly and he was given many honorable positions at the various Paris Salons. His works became (and still are) very valuable.

He also exhibited at the 1925 Exposition Internationale des Arts Decoratifs in Paris. His work can be seen in several pavilions, such as Jacques Ruhlmann's "Hotel d'un Collectioneur". He also went on to participate in major international special exhibitions, including in Geneva, USA, Athens, Amsterdam and Barcelona.

His regular gallery was Maison Géo (Galerie Rouard Paris), a gallery that offered art by all the great progressive artists in the field of applied art at the time, such as Jean Luce, Marinot, Heiligenstein, Goupy, Navarre, Thunet Sala, Mayodon etc.

By the late 1920s, his designs were only purely geometric in shape with minimal decoration. Surfaces were often ground to emphasize the cubist shape.

In the 1930s, his production became much less because he was completely absorbed in making stained glass. After WWII he went back to working with pâte de noche, on a small scale, in addition to his stained glass. He continued to do this until his death in 1971, when he was 91 years old. 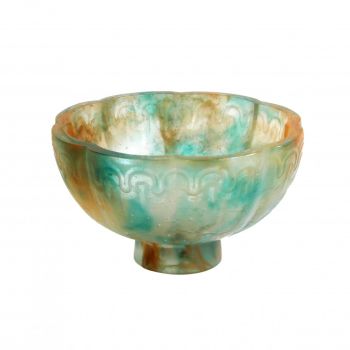 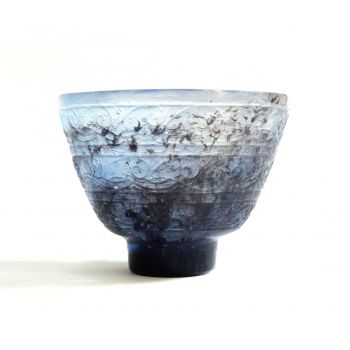