Jacques Boussard (Fr. 1915-1989) belongs to the 2nd generation 'École de Paris'.In his work the influences of Impressionism and Cubism are clearly recognizable. He was a student of the artist Roger Bissière, during his training at the Académie Ranson.Bissière was an important mentor to Boussard, but his first mentor at the college, Stanislas Rodrigue, was also... Read more

Jacques Boussard (Fr. 1915-1989) belongs to the 2nd generation 'École de Paris'.
In his work the influences of Impressionism and Cubism are clearly recognizable. He was a student of the artist Roger Bissière, during his training at the Académie Ranson.
Bissière was an important mentor to Boussard, but his first mentor at the college, Stanislas Rodrigue, was also important to him. He got Boussard to the Académie Ranson. Stanislas Rodrigue was himself a former student of Gustave Moreau.
Nevertheless, Jacques Boussard has mainly determined his own direction, sometimes against the current.

His still lifes became tighter, more cubist, with strong lines in the 1950s and he also used extra material to make them into a kind of construction. Very beautiful by the way.

He has traveled extensively, from 1931 to 1966, visiting Italy, Russia, Europe, the Middle East and the United States.
He has participated in various Salons and exhibited at various galleries. His first solo exhibition was at Galerie Eugène Blot in 1934, in 1935 Max Kaganovitch became his agent and his permanent gallery until Max Kaganovitch's death in 1974.
In addition, he exhibited at home and abroad and participated several times in a biennial and other international exhibitions.
In 1954 he also received the Prix Bührle, a prize first awarded to promising young artists in 1952 by the famous Swiss art collector Emil Buhrle.

The work of Jacques Boussard is still exhibited, Musée l'Orangerie du Sénat in Paris has another exhibition dedicated to him in 2015. They also bought a work, the same goes for Musée Intercommunal d'Estampes, which did the same in 2016.

In addition to still lifes, he has also made beautiful landscapes, as a tribute to the South, his use of color is then lighter, fresher and the landscapes here are also almost abstract areas of color and yet very recognizable as landscape.
He never wanted to work in a purely abstract way, he felt that the sweetness of the subjects themselves was lost too much.

1 artwork for sale by Jacques Boussard 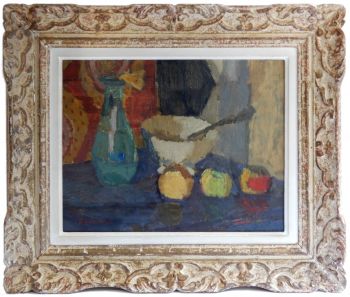