Léon Hatot (1883 – 1953) was a passionate entrepreneur: inventive, innovative and above all progressive. A child of his time actually, who was fascinated by the application of the latest materials and techniques. Entrepreneur and goldsmith Léon Hatot visited the École d' Horlogerie in Besançon from 1895 to 1898 and then the École des Beaux Arts, also in... Read more

Léon Hatot (1883 – 1953) was a passionate entrepreneur: inventive, innovative and above all progressive. A child of his time actually, who was fascinated by the application of the latest materials and techniques.

He soon established a workshop for clockmakers and jewelers in Paris as well. Here, assisted by a large number of craftsmen, he manufactured high-quality clocks, using special precious metals. At that time, Hatot was one of the few to manufacture watches as well as jewelry. He supplied them to the most important trading houses in Rue de la Paix in Paris.

Curious and with an eye to the future, Hatot soon becomes interested in the application of electricity in timepieces. In 1920, this resulted in the establishment of a department to research and develop battery-powered timepieces. Since 1923, Hatot electric clocks have been sold under the ATO brand name from the Paris and Besançon sites.

From the moment these timepieces appeared on the market, they were a resounding success. During the 'Exposition international des arts décoratifs', Hatot was awarded a 'Grand Prix' for its entire program of electric clocks. Characteristic of his models was that they were housed in marble, chrome-plated metal, refined woods or processed glass cases from the famous Lalique factories.

Because of the decorative design of these timepieces, Hatot is able to establish a name in the clock world as 'master of the Art Déco period'. His contribution to the scientific world is also great. Thanks to his creative and visionary spirit and his numerous inventions, Hatot managed to bring developments in the field of clocks to a higher level up to and including the second quarter of the twentieth century. France rewarded him for this with the highest national award, the 'Légion d'Honneur'.

In 1931, at the Colonial Exhibition in Paris, Léon Hatot presented a series of compact electric clocks that marked the beginning of a new generation of decorative timepieces. He completely broke with the current tradition in which the cases served as decoration and made the timepiece itself the eye-catcher. In this way, Hatot became a trendsetter for a new fashionable trend.

1 artwork for sale by Leon Hatot 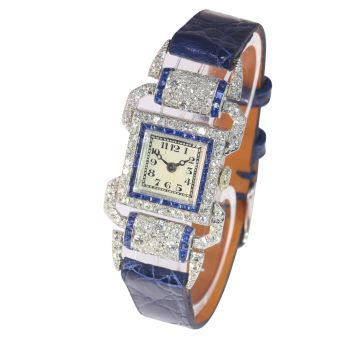