Paul Mathieu (Saint-Josse-ten-Noode, 31 August 1872 - Brussels, 1932) was a Belgian painter and watercolourist. Paul Mathieu (1908)He is known for his luministic and post-impressionist landscapes, city views, harbour views, interiors and still lifes. He trained at the École Normale d'Art in Brussels from the age of twelve. There he learned drawing and the craft of woodworker (in... Read more

Paul Mathieu (1908)
He is known for his luministic and post-impressionist landscapes, city views, harbour views, interiors and still lifes.

He trained at the École Normale d'Art in Brussels from the age of twelve. There he learned drawing and the craft of woodworker (in particular the imitation of marble on wood). He then went to work for a contractor for painting works including the restoration of the Monnaie Theatre in Brussels. After that he started to work independently as an industrial draughtsman.

His first works were still lifes and landscapes with a monotonous sky. But from 1896 onwards he concentrated on landscapes with more sway in the sky. Like a true pleinairist, almost all of his works lack characters. This would only distract attention from the theme dealt with. He enjoyed working in the Kempen region and on the Belgian coast. He was accepted at the Brussels Salon in 1893. He then boasted an important work at the World Fair in Antwerp.

He became a "line drawing" teacher at the Academy of Brussels from 1896 until his death in 1932.

He joined the Brussels art circle "Le Sillon", together with his friend the painter Alfred Bastien. Le Sillon was an artistic movement at the Academy of Brussels that opposed any -ism, such as Impressionism and Pointillism. They called this "dead art".

He collaborated with the painter Alfred Bastien on the 'Panorama of Belgian Congo', intended for the World Fair in Ghent in 1913. In 1911 Mathieu accompanied him to Belgian Congo to make preparatory sketches and drawings. They had received a travel grant for this from the Ministry of Colonies. This panorama became a gigantic canvas: fifteen metres high and with a circumference of 150 metres. It was intended as a kind of propaganda for the leading hand of the Belgians in the evolution of Congo. Paul Mathieu was the author of the landscapes and Alfred Bastien had taken care of the scenes of the people and the depiction of types of people. This huge work became a grandiose success with 480,000 visitors. A reduced version of this panorama is now in the prehistory room of the Royal Museum for Central Africa in Tervuren.

He stayed in Paris during the First World War where, as a Flemish colourist, he portrayed Parisian cityscapes in his own idiosyncratic way.

At the 1930 World Fair in Antwerp, colonial art was given its own salon. Paul Mathieu could exhibit here, together with other painters who had depicted Congo, such as Alfred Bastien, Frans Hens and some younger painters such as Henri Kerels, Fernand Lantoine and Fernand Allard l'Olivier.

His studio in the American Street in Ixelles, where he lived between 1905 and 1908, is protected as a monument. This house in eclectic style was built by the architect Emile Lambot. 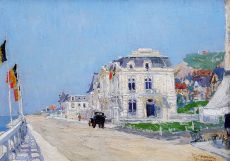 1 Artwork from this artist
305 artworks20 artists1 collection
1 - 1 / 1
We use cookies to provide statistics that help us give you the best experience of our site. By using this site without changing your cookie settings, you are agreeing to our use of cookies.
Cookie settingsAllow cookies