An imaginative artwork stimulates our senses at first with its beauty and the artist’s technical ability. Yang Peng’s art is much more than that, his concept: mysterious, mystical at times, and layered with deeper meaning; forces us to experience the transcendental and extraordinary beauty of life. Many artists are trying to achieve a flawless depiction of the human figure, but Yang... Read more

An imaginative artwork stimulates our senses at first with its beauty and the artist’s technical ability. Yang Peng’s art is much more than that, his concept: mysterious, mystical at times, and layered with deeper meaning; forces us to experience the transcendental and extraordinary beauty of life.

Many artists are trying to achieve a flawless depiction of the human figure, but Yang Peng uses the human figure, allowing for much artistic freedom of expression, to narrate a story, creating a relationship between the artist and his subject. Yang Peng paints with intelligence and theatricality. At first glance, the subject of his works is simplistic, yet he has a way of instilling in them vigour and energy that hints of deeper rumblings below the surface, experiencing the drama that is about to emerge; and challenging the observers to decipher his messages. His compositional approach in his paintings renders his works timeless, drawing our attention to the deeper human emotions by covering his subjects in plain fabrics or materials and placing them in arrangements connoting ideals of sensual and surrealistic imagery.

The drama within Yang Peng’s current series, “TRANSCENDENTAL EXPERIENCES”, provides the key into his political universe through layers of disguised metaphors. His displeasure for censorship is subtly narrated by not allowing his figures to open their eyes and view the world in its entirety, and yet another metaphor springs to the observers’ mind, “Is Yang Peng’s depiction of the surrealistic (false) world telling us that perhaps censorship has its place?” The contrasting metaphors within his paintings will not only fascinate the observers, but will broaden our philosophical perception of life and its meaning. Every painting in this collection forces us to question the artist’s intentions, transporting us to a territory of internal dialogue with the works, “What are you really telling us?” The ability to distinguish visible and invisible meanings of his works will create a fascinating learning journey for our cognitive development and imagination. The aptitude of Yang Peng’s works also allows for a deeper discovery into the human condition whilst creating a completely innovative and surreal context; a means of extending the way we reveal and perceive the human figure in art.

Whether you want to view the collection of artworks as a labyrinth of metaphors, or just simply to marvel at the beauty of the human form, we can’t help but accept the fact that Yang Peng’s narrative style in his art is mesmerising, a great display of contrasting elements, metaphors, and emotions. “TRANSCENDENTAL EXPERIENCES” will provide a lasting impression on its viewers, and it is definitely a journey worth savouring.

Yang Peng was born in Sichuan, China in 1984, and has grown up experiencing the Chinese integration of modern and traditional culture. In 2012 he graduated from Sichuan Academy of Fine Arts, Chongqing, China with his M.F.A. and in 2013, has been a lecturer in Sichuan Vocational College of Art till present.His work has been widely exhibited internationally in solo and group exhibitions as well as International Art Fairs. Yang Peng lives and works in Sichuan, China.

2 artworks for sale by Yang Peng 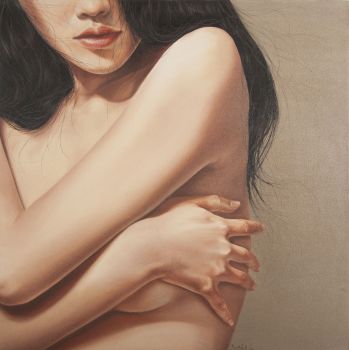 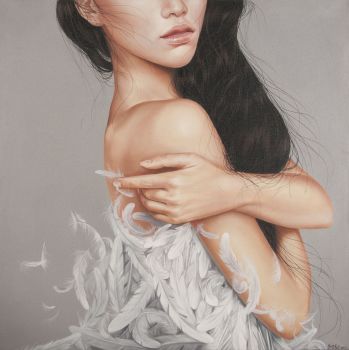