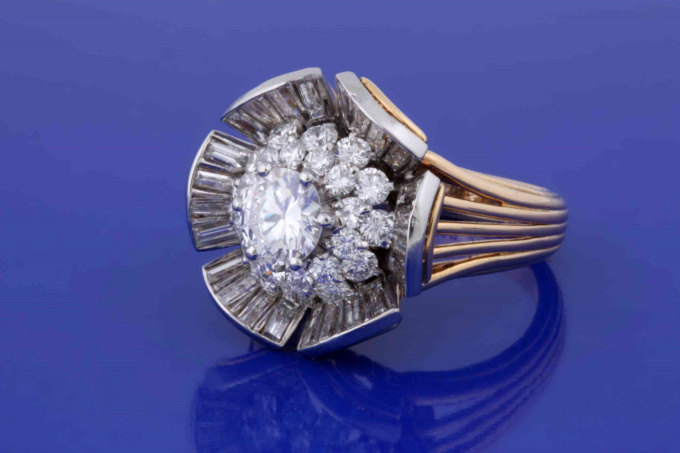 Marchak "the Cartier of Kiev" was one of the most prominent competitors of Faberge in great Russia at the end of the 19th century. As a result of WOI and the Russian Revolution Marchak fled to Paris to open a shop on the Famous Rue de la Paix. After the Russian years the house of Marchak peaked in the 1940s and 1950s with their designs inspired by birds and flowers. This ring is a beautiful example of all Marchak had to offer: a wearable, perfectly made piece of art.

In 1878 Joseph Marchak founded the House of Marchak, a fine jewellery company based in Kiev (formerly Russia). When the Russian Revolution broke out, the Marchak family fled to France and opened a jewellery shop in Paris in 1920. Due to both world wars business declined heavily, but after the 1950’s the company was revived by Alexander Marchak.

Alexander then hired Alexander Diringer to further develop the brand in France and Jacques Verger to branch out to the United States. Their bold, characteristic and colourful rings and brooches were especially popular amongst American customers and remain in high demand. Just recently, in 2010, the House of Marchak re-opened in Moscow and a new collection was created by one of its only heirs.