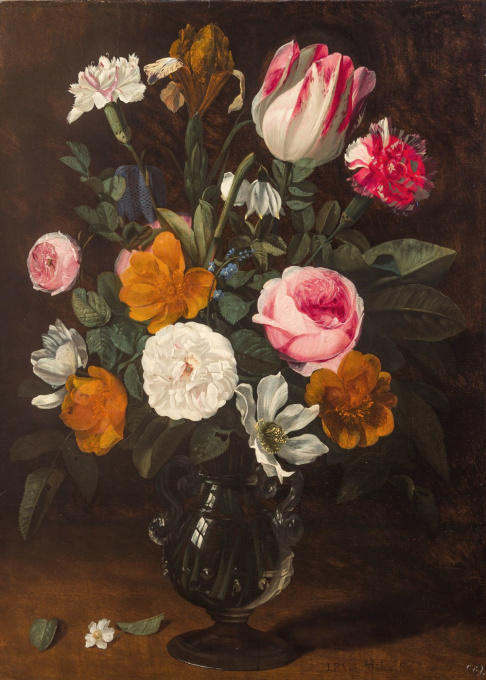 A Bouquet of Flowers in a Glass Vase 17th century

Jan Philips van Thielen was born in Mechelen in the South of the Netherlands in 1618 and was baptized on the first of April 1618.
Jan Philips van Thielen was the son of Librecht van Thielen, Lord of Couwenburgh, and Anna Rigoultz. Van Thielen trained with his brother-in-law Theodoor Rombouts (1597-1637) in 1631-32 and then became Daniel Seghers’ only pupil. In 1641-42 he registered in the guild as an independent master. Two years before, in 1639, he had married Francisca de Hemelaer, the sister-in-law of the aforementioned Erasmus Quellinus, and with her had nine children. Three of their daughters became flower painters themselves. On 9 March 1660 the artist was recorded as a buitenpoorter (a non resident citizen) in Antwerp and on 14 March he was enrolled in the guild of his native Mechelen, where he would remain the rest of his life.
Flowers were Van Thielen’s specialty. Following the lead of his teacher Daniel Seghers (1590-1661) he painted them in different formulae. Some of them are festoons, others garlands encircling cartouches framing an image showing a religious figure or scene, often by Erasmus Quellinus the Younger (1607-1678), with whom he collaborated on a regular basis. The present painting is one of the master’s rare bouquets. Marie-Louise Hairs was able to list about twenty of them in her catalogue raisonné of Thielen’s works (see literature). Dated works are known from 1645 until the year of his death, but almost no bouquets are dated. It is sometimes suggested that the development of his signature may be used as an aid in dating his paintings. For instance, those signed ‘I. P. Van Thielen Rigouldts’ (after his mother) would from the 1640s, while the signature ‘I.P. Van Thielen Heere Van Cowenberch’ is are to be found on his late works of the 1660s, when he assumed the title of Lord Cowenberch. The type of signature on our painting - ‘I.P. Van Thielen’ - is said to be typical for works painted after 1650.
All of his life Van Thielen remained faithful to the effective scheme of representing flower bouquets before a plain and empty backdrop, with the edge of a tabletop or ledge defining the pictorial space. Here, the brilliantly illuminated array of flowers is arranged in an elegant footed vase. The flowers include roses, tulips, carnations, forget-me-nots, snake's head fritillary and an iris. Even though the periods during which these different species blossom largely overlap it is impossible that Van Thielen could have studied this bouquet from life. Such artificial bouquets were the rule rather than the exception. Although many of the flowers depicted harbour symbolic meaning, in selecting their flowers the beauty of the species was the most important criterion for Van Thielen and his colleagues. The varied and sometimes complex shapes of the flowers invited these artists to show off their virtuosity and technical prowess. Such is the case here as well, albeit on a restrained level. The petals are crisply highlighted and leap forward from the dimly lit background. Thielen eloquently counterbalanced the colours and shapes of the flowers achieving a beautiful simplicity.
Jan Philips van Thielen died in Booischot, near Mechelen in the area of Antwerp in 1667.