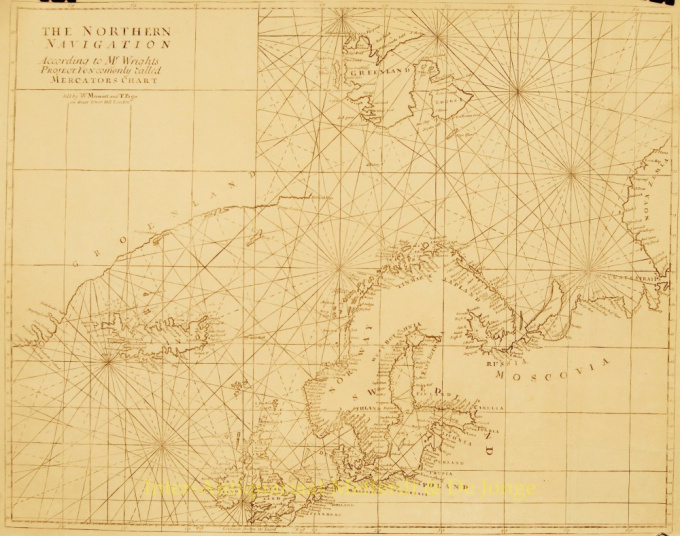 A Chart of Part of the North Sea from the South Foreland to Burnham Flatts, and from Callis Schellin 1756

“A Chart of Part of the North Sea from the South Foreland to Burnham Flatts, and from Callis Schelling Isle”
Copper engraving from “The English Pilot Describing The Sea-Coasts, Capes, Head-Lands, Soundings, Sands, Shoals, Rocks and Dangers, The Bays, Roads, Harbours, Rivers and Ports in the Whole Northern Navigation” published by W. and J. Mount, T. Page and Sons, London 1756. Coloured by a later hand. Size: 44 x 54 cm.

The English Pilot was an important British sea-atlas published from 1671 to 1803. Initially published by John Seller, publication of the atlas changed hands periodically, with other publishers including Charles Price, John Thornton, and the Mount & Page firm. The charts from the English Pilot were intended as working charts so there was an effort to make them accurate, although predictably, many seamen complained that the charts were consistently out of date and that changes were slow to appear, a charge leveled at virtually every British, French and American Chart maker, including the respective governments of these nations. Ironically, it was in no small part due to the proprietary nature of the information included in the maps and sailing directions that there was a tendency for commercial pilots to pass the information from mariner to chart-maker more slowly than might otherwise have been the case, although the chart makers on the Thames and otherwise were undoubtedly reluctant to immediately make each and every necessary correction, for fear of undermining the economic viability of their businesses.