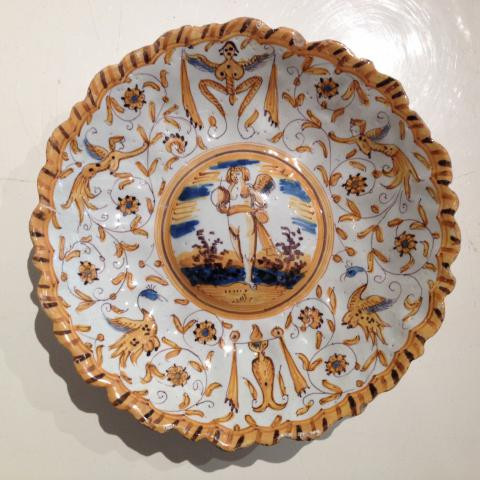 Willem Jansz. Verstraeten is viewed upon as being the most important potter in Haarlem of the second quarter of the seventeenth century.
Willem was a son of an Antwerp merchant with whom he moved to Haarlem in 1590. Willem started working in Delft at 'De Porceleyne Schotel', a ceramics factory in 1613. He started as an assistant but became the manager later on and became a member of the Saint Luke guild.In 1925, Verstraeten conceived a new method for making pottery and decided to open his own factory. This was likely a large pottery with up to fifty assistants working there.
Verstraeten mainly produced decorated faience, often with biblical or historical depictions inspired on the Italian compendiario-style maiolica. The plates were somewhat more sober than the Italian plates. From somewhere around 1640 the factory started producing more ceramics that competed with Chinese porcelain.
Verstraeten turned his pottery over to his son Gerrit in 1642 after a stroke. Oddly enough, Verstraeten completely recovered and opened a new factory himself. In order to divide the production of ceramics, Gerrit and Willem composed a contract. This division is vague however, and makes it difficult to determine who produced what in this period.
Later in his life, Willem focussed once again on the Italian style pattern in his faience. Willem Verstraeten gave his workers prints in order to facilitate the production of pieces. He was active between 1613 until 1655. His work is included in collections of multiple established museums such as the Rijksmuseum in Amsterdam.