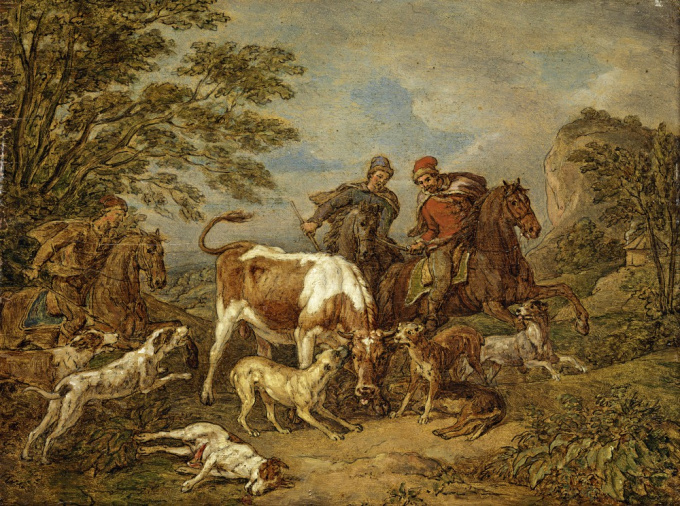 
A mountainous and woody landscape provides the stage for three horsemen and their dogs hunting a young bull. The animal is being attacked from all sides and tries to ward off the dogs with his dangerous horns. One of the attacking dogs is already hit and lies severely wounded in the foreground.

Pieter van Bloemen was prolific, both as a painter and as a draughtsman. His impressive oeuvre, which includes a wealth of subjects and motifs, still awaits further study and cataloguing. Van Bloemen was an excellent painter of animals, in particular of horses and alls sorts of cattle, and with great ease painted extraordinarily dynamic compositions filled with figures, such as the present. His skilfully composed scenes are strongly indebted to works by his tutor Douw (see for him below) and especially to Philips Wouwerman. The present small panel is thus typical for him and many of the motifs shown here recur in other works. Van Bloemen’s paintings often feature similar close-knit groups of horsemen and other animals as the centre of the composition. The technique, however, is unusual. The composition was first drawn in black oil paint and then worked up in colours of very thin oil paint, which leave the under-drawing visible throughout. The passages in lighter colours are executed with somewhat thicker but still translucent paint. No doubt this painting was meant to serve as a design for an artist working in some different medium. A firm chronology for Van Bloemen’s art has not yet been established and it is therefore difficult to date this painting.

Pieter van Bloemen was the oldest brother of the landscapist Jan Frans van Bloemen (1662-1749), called Orizzonte, and the genre and portrait painter Norbert van Bloemen (1670-1746). At age ten he trained in Antwerp with the painter of Italianate landscapes Simon Johannes van Douw (ca. 1630-1677 or later). In 1673 Van Bloemen registered with the Guild of Saint Luke as an independent master. At some point thereafter he travelled to Rome where he together with his younger brother Jan Frans joined the painters’ confraternity Bentvueghels (Birds of a Feather), receiving the nom de plume Lo Stendardo, probably because he often included banners in his scenes of soldiers and encampments. Van Bloemen is recorded in the Eternal City at least from 1685 to 1692. He returned to his native Antwerp in 1694, becoming a dean of the guild in 1699. In Antwerp he led a busy studio where he trained numerous pupils.

Pieter van Bloemen, also known as Lo Stendardo was born in Antwerp in 1657. He was baptized on the 17th of January.
He was a Flemish painter. He was a gifted landscape and animal painter and was very successful with his compositions depicting equestrian, animal and market scenes.
He was a pupil of Simon Johannes van Douw, according to some historians already from the age of 10. He became a master of the local Guild of Saint Luke in 1674 at the age of 17.
His two younger brothers were also painters; Jan Frans and Norbert.

Pieter became a member of the Bentvueghels, an association of mainly Dutch and Flemish artists active in Rome. It was common practice in the Bentvueghels to give each member a nickname, the so-called "bent name". Pieter's bent name was "Standaart" or in Italian "Standardo". It is believed he was given this nickname in reference to the standards and banners that he regularly painted in his military subjects.

In 1694 Pieter returned to Antwerp where he became the dean of the Guild of Saint Luke of Antwerp in 1699.

He was the teacher of his younger brothers Jan Frans and Norbert as well as of Peeter van Aken and Frans van Alter.
He died in Antwerp on the 6th of March in 1720.