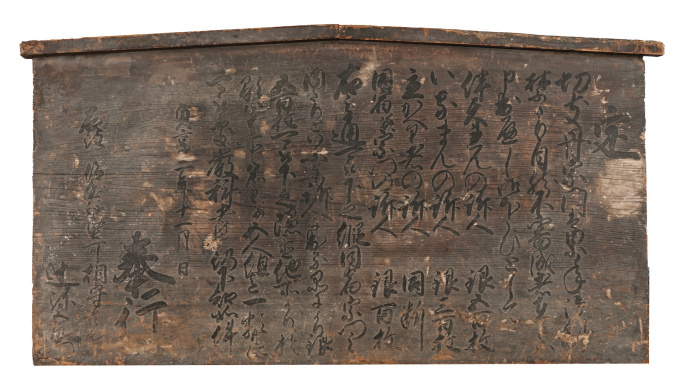 Of rectangular shape with a shallow-pitched roof, the wood left bare but for a long inscription in ink prohibiting the practice of Christianity and announcing rewards for the capture of Christians of various stature, with a signature for the Governor, Bugyo, and dated Jokyo ninen juichigatsu (November 1685).


Note:
Christianity was banned in Japan in the 1630s, and these edict boards were displayed all over Japan after that. However, few have survived due to centuries of rain and wind damaging the wood.
Christianity first appeared in Japan with the arrival of the Portuguese in 1543 and in particular with the arrival of the Jesuit missionary Franciscus Xaverius in 1549. The Jesuits focused their missionary efforts successfully at the higher strata of society, with Daimyo families in Kyushu such as the Satsuma clan joining the faith, partly to obtain imported goods (such as guns) the Portuguese Jesuits were trading in. However the Shogunate, military rulers of Japan, increasingly distrusted the Christian community and after the Shimabara rebellion of 1637-38 during which Christian peasants rebelled against the Shogunate, Shogun Tokugawa fully banned Christianity in Japan.

Other factors led to the ban, such as fear that the missionaries were paving the way for a foreign occupation of Japan and that the converts were spies for foreign powers. The proclamation of 1639 altogether outlawed the promulgation of and adherence to the Christian religion. It also marked the beginning of a long period of anti-Christian persecutions that lasted for two and a half centuries. Signboards such as the present one were set up all over the country, encouraging people to report Christians to the authorities for various financial rewards (500 pieces of silver for a priest and 100 for an ordinary convert). Being found out as a Christian involved the death penalty, sometimes by crucifixion, and symbols and objects used for Christian worship were destroyed or desecrated. Still after the Meiji restoration and the re-establishment of religious freedom after 1867, more than 30.000 “hidden Christians” came out of hiding.
Another “Edict board” relating to the prohibition of Christianity in Japan and dated 1682, is in the collection of the British Museum (acc.n.1895,0721.1).