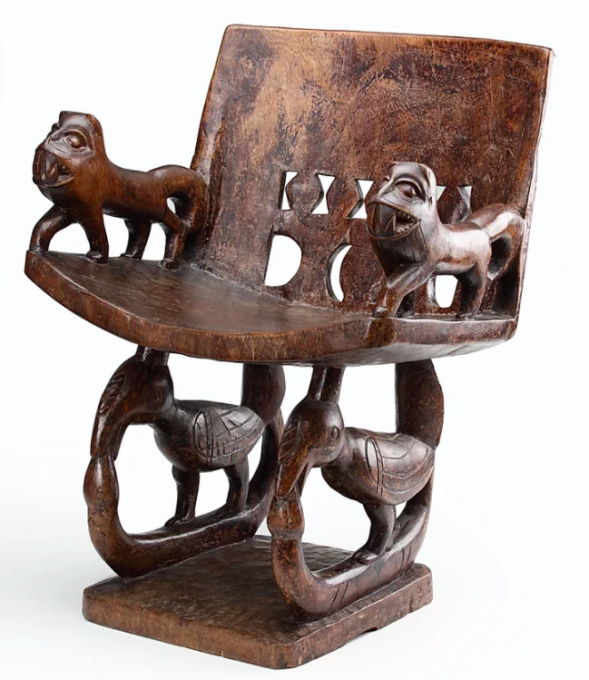 A KINGDOM OF BENIN 'PRESTIGE CHAIR'

​
On square base, each foot in the shape of a bird eating a snake, the arm-rests in the form of leopards, the back open-worked.
Overall a nice dark patina.

The leopards as armrests are classical royal Benin style. Benin kings are often referred to as “leopards of the house”. The supports in the form of powerful birds with snakes in their beaks derive from symbols of kingship.

In an engraving of the royal palace in Benin City published in 1668 in Olfert Dapper’s book “Naukeurige Beschrijvinge der Afrikaansche Gewesten”, enormous metal birds with outstretched wings poised on the main turrets of the palace and giant brass serpents zigzagging down the turrets, are shown.

John Hewett was an influential dealer in primitive art and antiques from the late 1940s to the time of his death in the late 1980s. He had two galleries in London and sold many antiquities to the Burrell Collection in Glasgow, to Sir Robert Sainsbury and many other distinguished collectors such as George Ortiz. There is a chapter about John Hewett in Hermione Waterfield’s book “Provenance”.