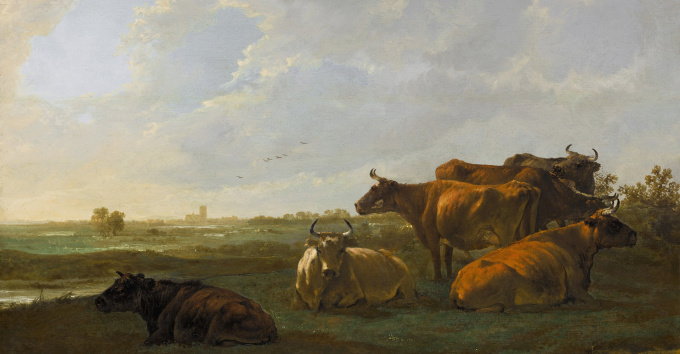 
Provenance:
Wilhelm Reinhold Valentiner (1880-1958), curator at the Metropolitan Museum of Art, New York, and subsequently Director of the J. Paul Getty Museum, California, by 1913, from whom acquired by Agnew’s, below
With Agnew’s, London, 1919, from whom acquired by Jacques Goudstikker, presumable on behalf of Anton Philips, recorded in 1928 as hanging in the salon at De Laak, and by descent
Sale London (Christie’s), 6 December 2007, lot 10, ill.

Literature:
A. Chong, Aelbert Cuyp and the Meaning of Landscape, PhD thesis University of New York 1992, p. 464 (not seen, not attributed)

A herd of cows sojourns in a verdant meadow surrounded by shallow hills. An uninterrupted view is offered to a distant horizon punctuated by the tower of Dordrecht’s Grote Kerk. A golden light comes from the left. The brightly lit cows are sharply set off against magnificent gray cloud formations.

Cuyp probably was the first Dutch artist who represented the theme of a herd of cows with a sense of dignity and grandeur. Predecessors such as Roelant Savery or Cornelis Saftleven depicted these animals as caricaturally clumsy and dim-witted. Through his fastidious observation of them Cuyp, on the contrary, shows cows as individuals and endowed with grace and elegance, and he even lends them a certain nobility.

Cuyp solely concentrated on the animals, omitting the herdsman and his dogs. The only sign of human presence is provided in the skyline, where the town of Dordrecht can be made out in the hazy distance. Cuyp’s scene is pervaded with an elegiac mood. In terms of subject and composition our painting can be compared to Cuyp’s somewhat larger panel of a River Landscape with Cows in the National Gallery of Art in Washington (inv. 1986.70.I), which no doubt dates from around the same years as our painting. The Christie’s catalogue entry quotes Cuyp scholar Alan Chong: “The signature is of the type Aelbert Cuyp employed from 1653 to about 1655, and the treatment of the sky is a product of the artist’s maturity. Whereas earlier skies consist of swirling masses of dark grey, vigorously applied, the greys in this sky are significantly lighter in tone and more relaxed in impasto. Importantly, the edges of the clouds facing the sun are painted with broken streaks of white, tinged subtly with pink and orange – a characteristic of Cuyp’s later work”. Our painting is an excellently preserved specimen of Cuyp’s most archetypical subject matter. With its lyrical and naturalistic portrayal of light it displays all the iconic qualities for which Cuyp is rightly famous.

The present painting boasts an impeccable provenance, having belonged to the great art historian Wilhelm Valentiner. After passing through the hands of Jacques Goudstikker, one of the most distinguished art dealers and tastemakers of his age, the picture came in possession of Anton Philips in 1919. It remained in his family and was for many decades out of sight of scholars until it surfaced in the Christie’s sale of the Philips Collection in 2007.

Aelbert Cuyp, also known as Albert Cuyp was born in Dordrecht on the twentieth of October in 1620.
He was a painter, drawer and printer from a artistic family from Dordrecht.
Cuyp is best known for his landscapes. He was taught how to paint by his father, Jacob Cuyp, who was also a landscape painter and wanted to teach his only child his profession.
In 1658 Aelbert married Cornelia Boschman, the widow of Johan van den Corput and their three children. Aelbert and Cornelia also had a daughter together who was born in 1659.
After 1660 Aelbert took on various functions in the Reformed Church and was buried in 1691 in the Augustine Church in Dordrecht.