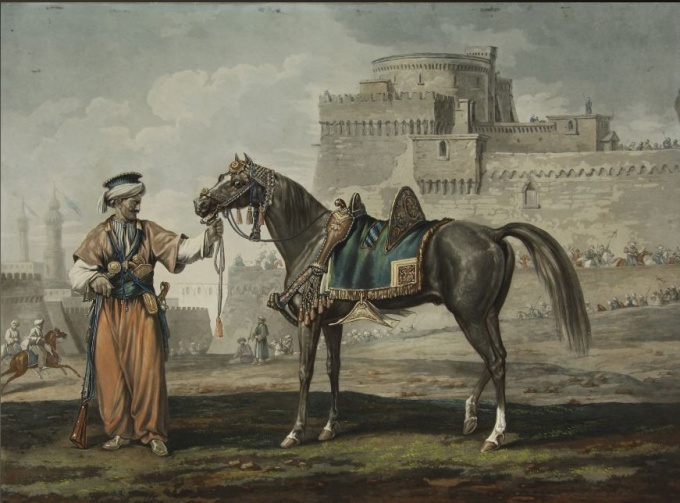 'A Mameluk Leading His Horse' and 'Fight between a hussar and Mameluk'.(2x) 1820

Carle Vernet: 'A Mameluk Leading His Horse' and 'Fight between a hussar and Mameluk'.
Two aquatint etchings in color, enhanced with watercolor. Engraved by Philibert-Louis Debucourt (1755-1832) after paintings by Carle Vernet.
Printed by Daude and published by Charles Bance & Aumont in 1820.
The aquatint 'Combat' with the year 1811 in the plate for the year in which the original painting was made.
In 19th century frames with title description in French.
One aquatint with no margins, the other with folded margins.

Antoine Charles Horace (Carle) Vernet was a French painter, the youngest child of Claude Joseph Vernet, and the father of Horace Vernet. Born in Bordeaux, Vernet was a pupil of Nicolas-Bernard Lépicié. After being awarded the Prix de Rome in 1782, the painter spent some time in Rome. Vernet joined the Paris painting academy in the course of the same year as the outbreak of the French Revolution. 1799 was a crucial turning point in Vernet’s oeuvre: he exhibited drawings from Napoleon’s Italian campaign in a new and original style, which has prompted scholars to argue that Vernet’s contribution was essential in introducing strategy and verisimilitude in contemporary battle painting. This was in large part due to his exceptional ability to paint horses. Napoleon awarded him the Legion of Honour. Louis XVIII awarded him the Order of Saint Michael.

These aquatints depict Mameluk soldiers, renowned for their ferocity and superb abilities as cavalrymen. A Cairene citadel can be seen in the background. The Mameluks began as a slave warrior caste in the 9th century, created by Muslim rulers. They later became landowners and rulers in their own right, primarily in Egypt. By the Napoleonic era, their influence was on the decline, however, they were still a fearsome fighting force. Napoleon defeated the Mameluk army when he invaded Egypt in 1798, but was greatly impressed with their courage. He created a special Mameluk corps in the French army, and he, himself, had a Mameluk body guard named Roustan. In one of these aquatints, the Mameluk is armed with a scimitar, rifle and brace of pistols, and wears the uniform of the Napoleonic squadron before 1804: the green cahouk (hat) wrapped with a white turban, red sarousal (trousers), loose white shirt and waistcoat.

Born in Bordeaux, Vernet was a pupil of his father and of Nicolas-Bernard Lépicié. Strangely, after winning the grand prix (1782), his father had to recall him back from Rome to France to prevent him from entering a monastery.
In his Triumph of Aemilius Paulus, he broke with tradition and drew the horse with the forms he had learnt from nature in stables and riding-schools. His hunting-pieces, races, landscapes, and work as a lithographer were also very popular.
Carle's sister was executed by the guillotine during the Revolution. After this, he gave up art.

The Plaster Kiln at Montmartre
When he again began to produce under the French Directory (1795–1799), his style had changed radically. He started drawing in minute detail battles and campaigns to glorify Napoleon. His drawings of Napoleon's Italian campaign won acclaim as did the Battle of Marengo, and for his Morning of Austerlitz Napoleon awarded him the Legion of Honour. Louis XVIII of France awarded him the Order of Saint Michael. Afterwards he excelled in hunting scenes and depictions of horses.

In addition to being a painter and lithographer, Carle Vernet was an avid horseman. Just days before his death at the age of seventy-eight, he was seen racing as if he were a sprightly young man.

He died in Paris.