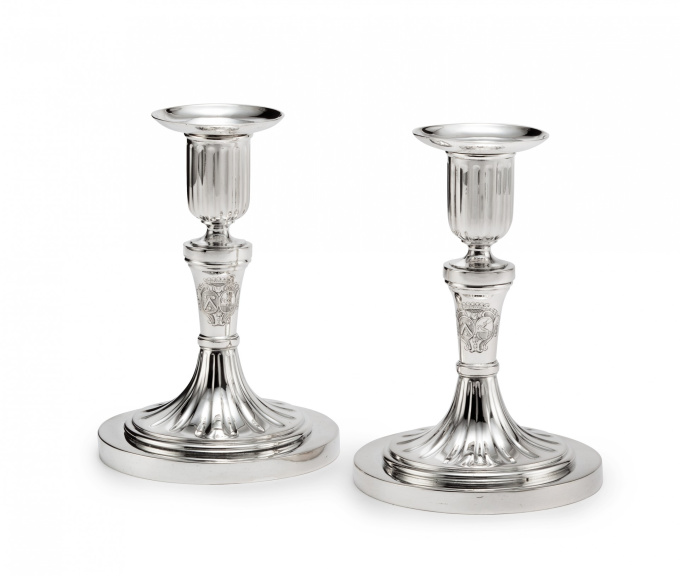 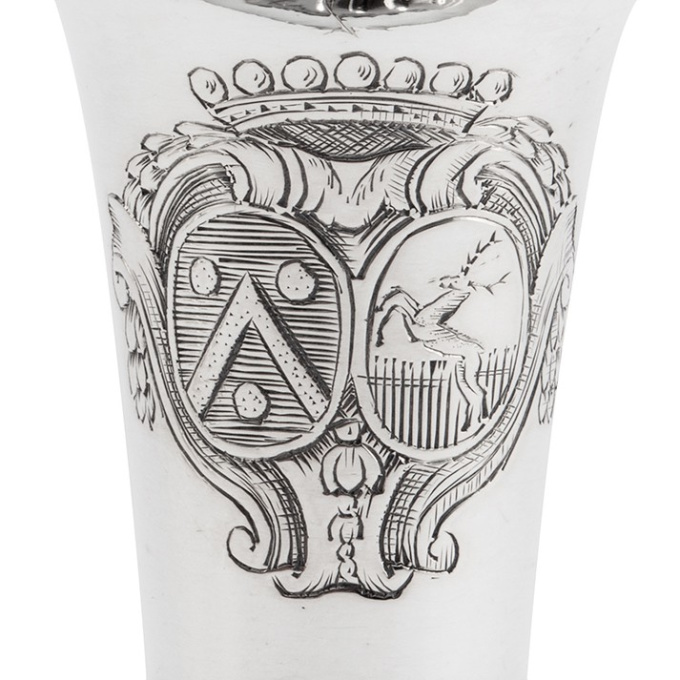 A pair Dutch of silver candlesticks 1784

The coats-of-arms are those of John Hope (1737-1784) and his wife Philippina Barbara van der Hoeven (1738- 1790). This couple married in 1763.
Hope was a famous Amsterdam merchant and banker. He was governor of the East India Company and many times a member of the Board of Aldermen in Amsterdam.
These small candlesticks, possibly made as gaming table candlesticks, were manufactured in 1784, the year John Hope died.
They are included in the catalogue associated with the exhibition at the Rijksmuseum, dedicated to the work of silversmith Johannes Schiotling (Cat. 37).

John Hope (1737-1784) was a fabulously wealthy Amsterdam banker of English origin. In 1763 he married Barbara Philippina van der Hoeven (1738-1789), daughter of a Rotterdam regent. They had three sons. Besides a house at Keizersgracht and Herengracht in Amsterdam and a house in The Hague, John Hope had various estates, namely Groenendaal, which he merged with Bosbeek in Heemstede and Castle Nederhorst, which allowed him to be called Lord of Nederhorst and ’s Gravenambacht since 1774. John's ambitions were not only in trading. In 1765 he became alderman of Amsterdam, in the Amsterdam Council in 1768 and in 1770 he became governor of the VOC. Besides houses John also collected art. In 1771, together with his uncle Adrian, he bought paintings from the estate of their Rotterdam friend Bisschop.
The Bisschop Cabinet was a renowned collection, containing paintings of almost all Northern and Southern Dutch 17th century masters. This collection John Hope filled with paintings by Rembrandt, Ter Borch and Metsu from the collection Braamcamp. He had an extensive collection of sculptures in marble, stone, ivory and plaster, Japanese lacquer ware, porcelain and antique mosaic table tops from the excavation at Tivoli.

In 1747 he started a six-year apprenticeship to Olof Fernlöf, one of the best silversmiths in Gothenburg.

In 1753 he passed his journeyman exams. Nothing is known about the next nine years; probably he travelled around until ending up in Amsterdam in 1762.

Schiotling registered as a master with the Amsterdam silversmiths guild and married. In Amsterdam a group of silversmiths gravitated around him. His firm's produced numerous pieces and Schiotling focused increasingly on retailing rather than making silver objects.
Although his workshop produced many candelabras, he sold many different objects.