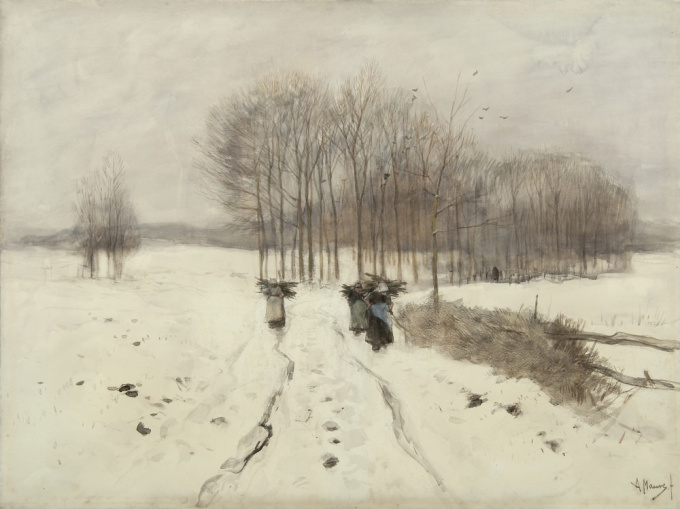 Anton Mauve is one of the foremost painters of the Hague School. He received his training from the animal painters P.F. van Os and Wouterus Verschuur. He also worked for a time in the Gelderland village of Oosterbeek with P.J.C. Gabriel. In his paintings he combines landscape and animals. After some wanderings he settled in The Hague in 1871, later in Laren, where he painted the heathland with herds of woolly sheep melting into the silver grey tones of the landscape. One of his favourite spots was an area of waste land situated just outside Laren, which later became known as the Mauve Sands.

Antonij (Anton) Mauve (1838-1888) was born in Zaandam. At 16, he went to Haarlem where he was apprenticed to Pieter Frederik van Os, a specialist in painting cattle, followed by Wouter Verschuur who painted horses. Mauve and Paul Gabriel often went into the country to paint from nature. At twenty he started visiting Oosterbeek, a village that attracted many artists. In 1871, he took a studio in The Hague.

For a while, he taught Vincent van Gogh, to whom he was related by marriage. In 1882, Mauve began visiting Laren for the summer, eventually moving there in 1885. By that time his work was widely known and sought-after by collectors in Holland and abroad.
His landscapes with sheep were especially popular in America; interestingly, a distinction was made between 'sheep coming' and the slightly less expensive 'sheep going'. Mauve’s evocative landscapes place him firmly in the Hague School.