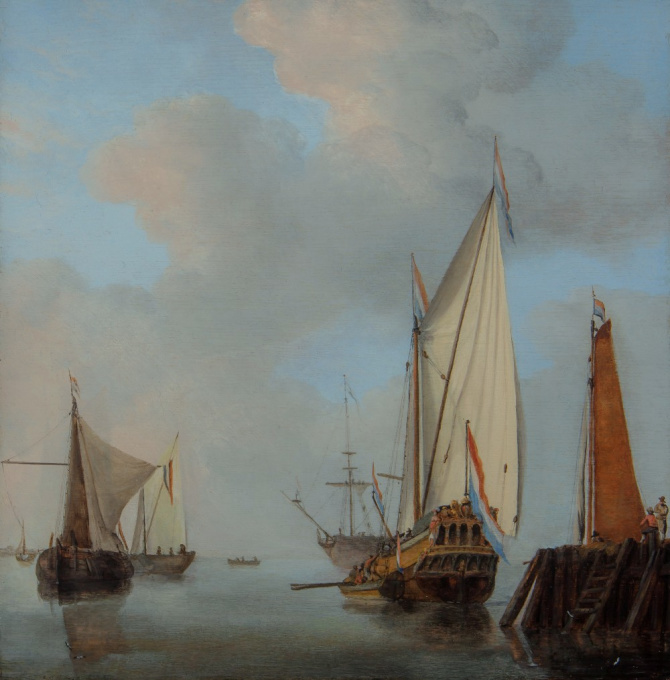 Inscribed lower right on one of the stairs of the stepladder: “W.V.V. [angular letters]”

On a sunny day under a blue sky with billowing cumulus clouds, small vessels rest in a calm near a jetty. There is barely any wind and the water is motionless. A coastline is visible at the extreme left in the far distance. A sprit rigged States yacht in the foreground under mainsail and foresail is close to the end of the pier. The top of her stern is decorated with two sculpted lions carrying the coat of arms of the city of Amsterdam. A sloop is alongside her, probably receiving provision to be transported to the three-master beyond, no doubt an Indiaman. Three sailors stand on the pier and behind them the mast and sail of yet another vessel rise up. Seagulls hover over the water in the left and right foreground. On the left in the middle distance is a wijdschip and further away, a small yacht. The tiny silhouette of a barge punctuates the view onto the open water. Perhaps this scene is located off Texel, the usual assembly point for merchant ships sailing to the East Indies.

A true master of observation, Van de Velde conjures up a busy day with quiet weather. The viewer can easily imagine hearing the voices of the sailors and workmen. On most of the shipping human activity can be observed, but it is made subordinate to the all pervading, tranquil mood. The reflections of the ships’ hulls emphasize the flatness of the water surface.

Van de Velde began to paint inshore calms at the start of his career in the early 1650s and concentrated on this subgenre during this first chapter of his career. He continued to depict calms in the early 1660s, returning to his specialty less frequently after that. Although it is impossible to give an accurate date for our painting, it certainly belongs to this early period during which Van de Velde produced the finest examples. In the present calm Van de Velde strikes the perfect balance between sensitive atmospheric effects and pronounced contrasts in light and shadow.

Most of the calms are set under a sky of piled up cumulus clouds and all of them offer a continuous view to the horizon, creating a powerful sense of space. The compositional structure consisting of solid horizontal and vertical lines lends these quiet scenes monumentality, a quality also prevalent in our small panel painting. It was in these subtly composed coastal views that Van de Velde reached his apogee of refinement.

Willem van de Velde the Younger was born on the 18th of December in 1633.
He was baptized on that same day in Leiden.
He is known as a Dutch marine painter.

Willem was the son of Willem van de Velde the Elder, who was also a painter of sea-pieces, Willem van de Velde, the younger, was educated by his father, and afterwards by Simon de Vlieger, a marine painter of repute at the time, and had achieved great celebrity by his art before he came to London. By 1673 he had moved to England, where he was engaged by Charles II, at a salary of £100, to help his father in "taking and making draughts of sea-fights", his part of the work being to reproduce in color the drawings of the elder Van de Velde. He was also patronized by the Duke of York and by various members of the nobility.

Most of Van de Velde's finest works represent views off the coast of Holland, with Dutch shipping. His best productions are delicate, spirited and finished in handling, and correct in the drawing of the vessels and their rigging. The numerous figures are tellingly introduced, and the artist is successful in his renderings of sea, whether in calm or storm.The ships are portrayed with almost photographic accuracy, and are the most precise guides available to the appearance of 17th-century ships.

There are a number of van de Velde's marine paintings in the Wallace Collection, London, including "The Embarkation of King Charles II at Scheveningen, 1660".

Willem van de Velde the Younger died on the 6th of April in 1707 in London, England. He was buried at St. James's Church.