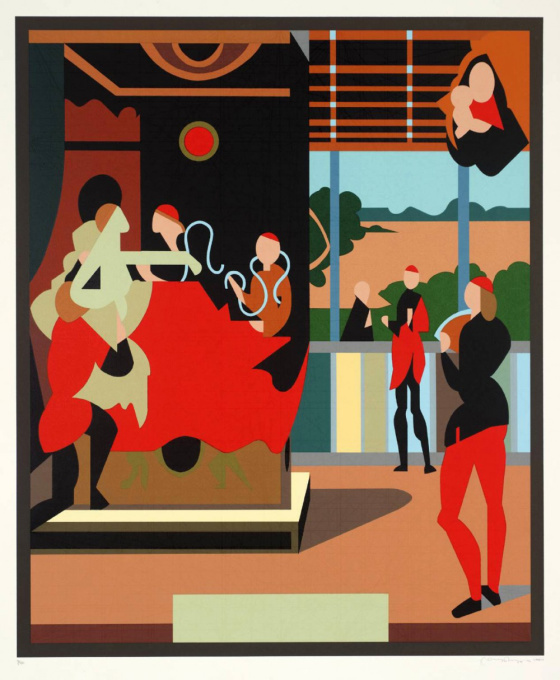 Tom Phillips was born in 1937. He is an artist who has mastered nearly all trades in the field, ranging from painting to opera and from poetry to writing and sculpting. This variety is his hallmark.

Phillips attended drawing classes and lectures on Renaissance iconography alongside his studies and theatre at Oxford. Once back in London Phillips was taught by Frank Auerbach at Camberwell School of Art.

In 1965 Phillips held his first one-man exhibition in London. He won the John Moores Prize four years later. In 1966 Philips dedicated himself to making art out of secondhand books. This ultimately led to his A Humument, a radical rework of a forgotten Victorian novel. Phillips published 4 editions to date.

Since the mid 1970s, Phillips has received many commissions for site-specific artworks and portraits. He has made tapestries for his old college in Oxford, sculpture for the Imperial War Museum, street mosaics for his native Peckham, and ornament and memorials for sacred spaces, including both Westminster Cathedral and Westminster Abbey.

Phillips's portrait subjects have included Samuel Beckett as well as friends such as Iris Murdoch, Sir Harrison Birtwistle, Richard Morphet (keeper of the Tate modern collection until 1998) and the Monty Python team.

In 1989, he became only the second artist to have a retrospective of his portraits at the National Portrait Gallery. Fifteen years later, at the same gallery, he curated an exhibition of his large collection of postcard photographic portraits from the early part of the last century, under the title We Are The People. This passion for collecting, classifying and curating also found expression in his book, The Postcard Century, which portrays the history of each year from 1900-1999 through a collage of these vernacular images.

Phillips received the Frances Williams Memorial Prize in 1983 for his illustration and new translation of Dante's Inferno. He also made a TV version of the Inferno with Peter Greenaway which won them jointly as directors the Italia prize.

Elected to the Royal Academy in 1984, Phillips went on to chair the Academy's Library and its Exhibition Committee from 1995 to 2007. He also served as a trustee for the National Portrait Gallery and British Museum. Phillips was made a Commander of the British Empire for services to the Arts in the 2002 Birthday Honours list. In 2005, he was appointed Slade Professor of Fine Art, at the University of Oxford, and between 2005 and 2011 he was invited as an annual Director's Visitor to the Institute for Advanced Study in Princeton.

Now retired from committee work and portraiture, Phillips remains an occasional broadcaster and public speaker of wit and vision.

Oxford's Bodleian Library recently took over Tom Phillips's archive and he is publishing with them his postcard collection in a series of books. Phillips's collaboration with Tarik O'Regan on an operatic version of Conrad's Heart of Darkness, for which he provided the libretto, was premiered at the Royal Opera House's Linbury Theatre at the end of 2011.

Tom Phillips is represented in London and New York by Flowers Gallery.