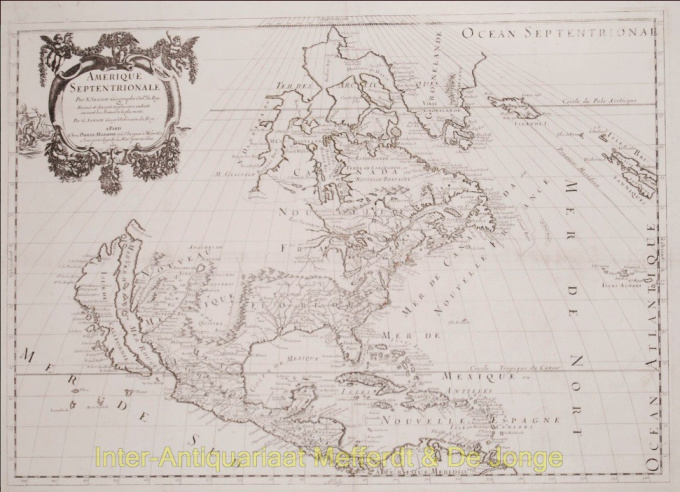 ONE OF THE EARLIEST MAPS TO DEPICT ALL 5 GREAT LAKES – Amerique Septentrionale
All of North America, with California depicted as an island. Engraved by Pierre mariette, published by Nicolas Sanson in 1659. First map to name Lakes Superior and Ontario. Burden calls this a “landmark map of North America. It was drawn, with his usual care, using the sinusoidal projection which is sometimes known by the name Sanson-Flamstead.

It is, perhaps, most important for being the first printed map to delineate the five Great Lakes in a recognizable form… To the west, S Fe, Navajo, Apache, Taosij and others all appear for the first time. The first is incorrectly placed on the west bank of the Rio Grande, here again flowing to the south-west. These were the first advances in the geography of this region for some time. The information was derived from the travels of Father Alonso de Benavides in the late 1620’s…

California as an island is of the Briggs type with some important alterations; Sanson introduces four placenames from the de Laet map of 1630, C. de Fortune, C. de Pinos, C. de S.Martin and C. de Galera…” There were three states of the map, of which this is the third. The first state, of which only two examples were known, had no land to the north-west of California; the second state, also quite uncommon, added coastline at that point, and eliminated a few placenames north of California; the third state is the same as the second, except that Lake Ontario has been shaded to match the other Great Lakes.

Pierre Mariette or Pierre-Jean Mariette was born on the 7th of May in 1694 in Paris, France.
He was the son of Jean Mariette, and came from a a long-established and highly successful family of engravers, book publishers and printsellers in Paris.
Pierre himself was a collector of and dealer in old master prints, a renowned connoisseur, especially of prints and drawings, and a chronicler of the careers of French Italian and Flemish artists. He was a central figure in the artistic culture of the city for decades.

After he attended the Jesuit college in Paris, his father, Jean Mariette (1660–1742), sent him on tour in 1717, to sharpen his connoisseurship and further family connections.
First he went to Amsterdam, which was the center of the art trade, and then to Germany. In Vienna Mariette catalogued the art collection of Prince Eugene of Savoy. Everywhere the affable, curious and sociable Mariette made acquaintances and formed contacts with the scholarly and artistic community in Europe, which he maintained through correspondence.

Through his artistic connections, Mariette was named a member of the prestigious Accademia delle Arti del Disegno, Florence, in 1733. His knowledge of prints and his close friendship with Caylus and the artist Charles-Antoine Coypel secured him a position reorganizing the old master print collection of the Bibliothèque Royale. In 1741 Mariette was asked to write the sale catalogue of Crozat's collection of paintings and antiquities, the first example of the modern descriptive sale catalogue.
Mariette engraved and printed several plates, an aspect of the family business. His engravings illustrated the Cours d'architecture qui comprend les ordres de Vignole ä ceux de Michel-Ange of Augustin-Charles d'Aviler (Paris, 1760).
In 1764-65 he got into a public dispute in the pages of the Gazette littéraire de l'Europe with Giovanni Battista Piranesi, whom Mariette admired greatly as an artist.

Mariette married Angélique-Catherine Doyen in 1724. He acquired a country house at Croissy, which he named "Le Colifichet" was ennobled during the reign of Louis XV, and honored with the Order of the Saint-Esprit.
Pierre Mariette died in Paris on the tenth of September in 1774.