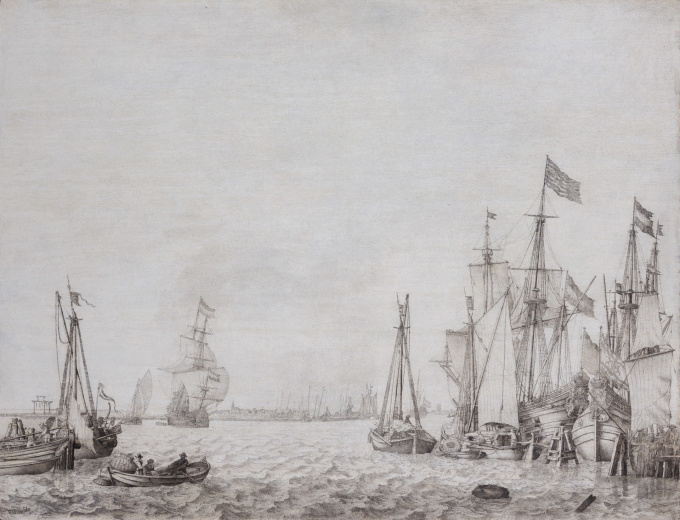 View from the Old City Inn.

Willem van de Velde sr. must have been at the steps in front of the Old City Inn on the west side of the Amsterdam sea front, looking northeast towards the northern bank of the IJ. The Old City Inn was a public house, where travelers, who had arrived by ship, could recover from the cramped accommodations on board and where they could finally get a decent meal after the beans and bacon
the ship’s cook had to offer. The Inn was also a pub and in that function the most logical location to berth the many yachts the upper class population of the city owne

Pen painting was probably not a Van de Velde invention. Before him the famous graphic artist Hendrik Golzius (1558-1617) from Haarlem experimented with his pen on carefully prepared canvas, and the Frans Hals Museum owns a pen painting on panel by the engraver Jacob Matham (1571-1631) also from Haarlem, dated 1627.
Whether or not Van de Velde was aware of their activities we do not know, but it is likely that he was. What he made looked like an engraving, but was in fact a unique product that could be hung on a wall like a painting. Golzius, Matham and Van de Velde all used graphic techniques like washes and hatching. The possibility to draw very minute details allowed Van de Velde to show how much he knew about the construction of ships and how to sail them.

He started his career with small drawings on vellum (a fine sort of parchment), which consists of prepared, chalked and polished animal skins, in those days mostly young goats. The limited size of the skins made him look for other materials. Wood was the logical solution, though it was not without restrictions. The material naturally shrinks and expands because of temperature and moisture influences and the larger they are, the more shrinkage was to be expected. But panels of different sizes were readily available, complete with a preparation layer made of chalk and glue, sold in standard sizes. The only thing the painter had to do was to apply a coat of thin oil paint, the so-called ‘imprimatura’.

Willem van de Velde the Elder (1611-1693) is considered to be one of the most succesful and prominent marine painters of the Dutch Golden Age.

He came from Leiden and moved to Amsterdam with his wife and son in 1636. In later years he had a studio together with his son, Willem van de Velde the Younger (1633-1707) with a vast production of paintings and grisailles of numerous ships in battles and seascapes. As a very early embedded journalist the Elder witnessed several sea-battles in the period of the Anglo-Dutch Wars (1652-1674) in which he proved himself to be a sharp observer and skillful draftsman, especially in reproducing ships. His action sketches can almost be read as hand-writing and often come with scribbled remarks about colors and the nature of decorations. Back in his workshop he developed them into grisailles (pen paintings), while his son used them as the basis for his fabulous oil paintings.

But not only sea battles were painted: ship’s portraits were a very popular product which father and son Van de Velde produced in abundance. Many captains had their ships painted, sometimes in dangerous situations, and were prepared to pay well. The Van de Veldes created a market for the genre. Other marine painters worked before them, and many followed, but none of them reached the level of craftsmanship, the meticulous detail and the atmosphere the Van de Velde paintings present. With their work they inspired many other painters of their time, and though there were fantastic artists amongst them, a Van de Velde is always recognizable. Apart from their artistic value, the work of the father and his son contributed a lot to our knowledge of the ships of those days and of the lengths our ancestors went through to gather and protect the wealth that gave the era its name in Holland: the Golden Age.