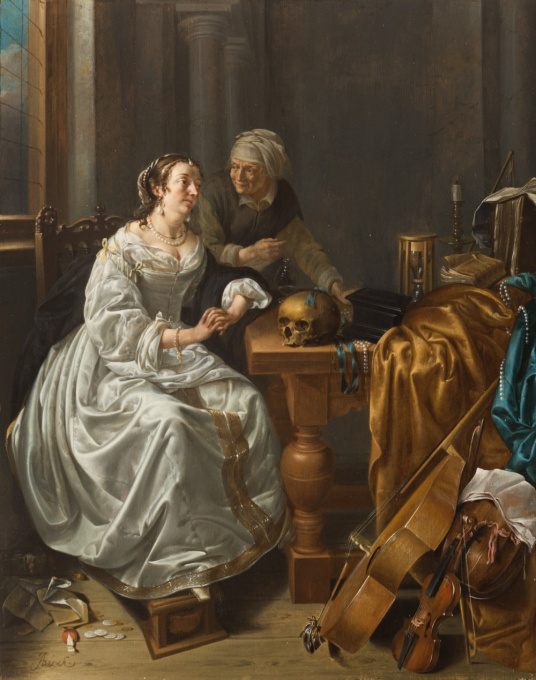 Provenance:
With art dealer Richard H. Ward, London, 1930-32
Kurt Rohde, Berlin, acquired from the above in 1932
Thence by descent to Elisabeth Rohde, Berlin, until sold at the below
Sale Berlin (Grisebach), 3 July 2015, lot 3079, where acquired

Jacob Duck was likely born in Utrecht probably the second son of Jan Jansz Duck and Maria Bool. His mother was a linen merchant in Utrecht, where Jacob spent his youth. In 1611 his parents apprenticed him to a goldsmith and he was registered as a master in the goldsmith’s guild in 1619, even appearing in the guild records as late as 1642. In 1620 Duck married Rijckgen Crook, who bore him at least eight children, six of them were daughters who survived childhood. The following year the records of the guild list him as a pupil (“leerlinghe”) of Joost Cornelisz Droochsloot (1586 - 1666). That same year he is recorded as an apprentice portrait painter (“conterfeyt jongen”). By 1630-32, he was listed as an independent master in the guild’s records, but he must have been painting for a while already because his earliest dated work is even earlier: 1628. Duck stayed a resident of Utrecht during these years and his presence in this town is documented at least until 1649. By 1660, however, he is recorded as living in The Hague. One year later, he is back in Utrecht. He died here 20 or 21 January 1667 and was buried 28 January at the St. Mary Magdalena monastery.

Duck’s output largely consists of brothel and guardroom scenes, both initially often densely populated. It was in his later production that the noisy and crowded interiors gradually developed into quieter scenes with fewer protagonists. In doing so Duck was experimenting with composition formulae that offered a whole range of new dramaturgic possibilities. He explored these artistic avenues in competition with the leading artists painting guardroom scenes, such as Symon Kick (1603 – 1652) and Gerard ter Borch (1617 – 1681). The reduction of the number of figures led to a preference for upright formats and invited the artist to zoom in on the protagonists, resulting in a more detailed description of the dress, gestures and physiognomies. Although few dated works by Duck are known, it is thanks to these features that our painting can be classified as a mature masterpiece. Moreover, the painting is quite accurately datable to the second half of the 1650s on account of the woman’s striking silk satin dress, which clearly bears the stamp of fashion. His evocative images such as the present, typical for the final stage of his production, sum up what the scholar Jochai Rosen has aptly called the artist’s “apogee in elegance and refinement”.

Duck’s oeuvre is permeated with vanitas. A large percentage of his works are guardroom scenes in which the protagonists are involved in idle pursuits and in general display loose morals. During the Eighty Years’ War the presence of garizoned troops would have transformed many Dutch cities into a stage for unruly behavior. This reality is reflected in Duck’s raucous soldiers’ scenes. These images are about war, lust, sloth, status and greed, which as earthly, and by Christian tradition, sinful concerns are loosely associated with vanitas. Duck also devoted a few paintings explicitly to the theme of vanitas in which the allegorical nature is pronounced. Our painting is a case in point. Set in an interior with contemporary furniture, it has the appearance of a genre scene. However, we are certainly not looking at an ordinary situation drawn from seventeenth-century daily life and a closer look reveals the scene’s unequivocally allegorical character. The young lady in white satin is posing at a table toped with an array of vanitas paraphernalia. Contemporary beholders would have readily grasped the vanitas message Duck is conveying in this painting.

Jacob Duck died in Utrecht on the 20th or 21st of January in 1667 and he was buried on the 28th of January at the St. Mary Magdalena monastery.