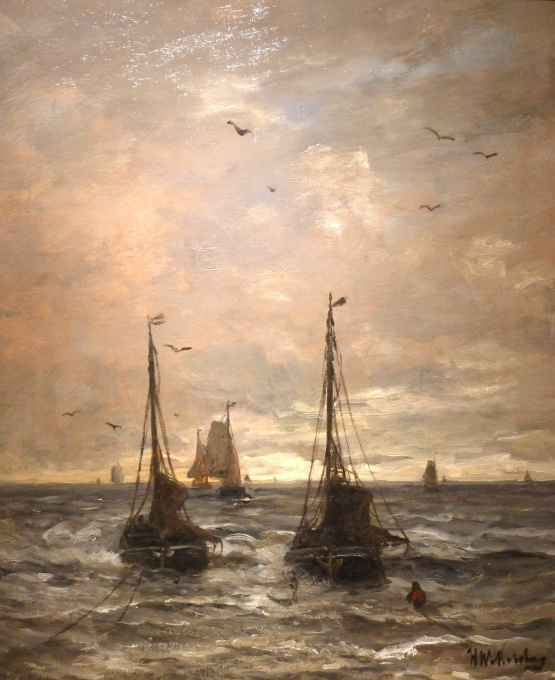 Hendrik Willem Mesdag was born on the 23rd of February in 1831. He was born in Groningen as the son of banker Klaas Mesdag and Johanna Wilhelmina van Giffen.

Mesdag was encouraged by his father, an amateur painter, to study art. He married Sina van Houten in 1856, and when they inherited a fortune from her father, Mesdag retired from banking at the age of 35 to pursue a career as a painter.It was then that Mesdag decided to become an artist. Until then he had been working at his father's bank and had drawn purely for pleasure.

To pursue his studies he moved to Brussels, where his teacher was the Dutch painter Willem Roelofs. The sea became Mesdag's principal theme.

In 1869, he settled by the coast at The Hague. His favourite place for painting was the beach at Scheveningen. In 1870 he made his international breakthrough, winning a medal at the Paris Salon.

His most spectacular work, the Panorama, was completed in 1881. This circular canvas, 14 metres high and 120 metres in circumference, can be seen in The Hague near Museum Mesdag. He founded the museum next to his house together with his wife Sientje Mesdag-Van Houten, herself an artist, to show their collection of work by artists of the Hague and Barbizon schools.

Mesdag died on the 10th of July in 1915, but he left a legacy to the Hague where the Panorama is still displayed.