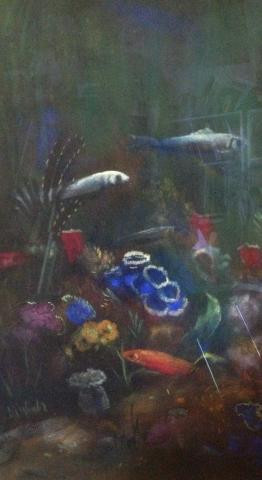 Janus De Winter worked in the nineteenth-century tradition of the 'translation' of music into abstract shapes and colors and painted visions, auras 's and dreams. He was a follower of Wassily Kandinsky and developed a variant of lyrical expressionism . He was friends with the Utrecht painter Erich Wichmann . In October 1915 Wichman introduced him to painter and art critic Theo van Doesburg who for a time was very enthousiastic about de Winter's work. De Winter even influenced van Doesburg's work during this period - such as a number of expressive and highly charged pastels and self-portraits of this period including waanhoop (1915).

In 1916 van Doesburg wrote about de Winter:
"De Winter tried to explain to us every color, the significance of each form or color component, relating it to the psyche of the individual or the specific situation, which inspired him. I felt a particular emotion, but gave me no account of whether the emotion was an aesthetic one. I was very impressed and felt that everything, both his person and his work introduced into me a certain demonic atmosphere, which enveloped me like a red incense ."