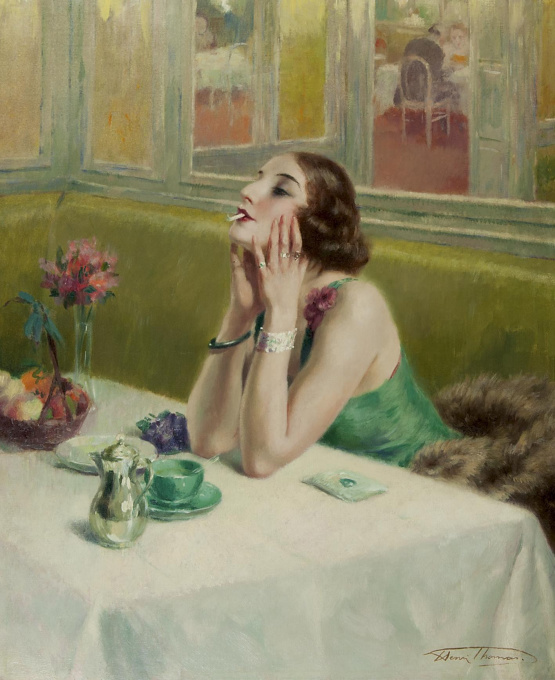 Henri Joseph Thomas (1878 - 1972) was a Belgian genre, portrait and still life painter, sculptor and etcher from the Belgian School, Brussels, Belgium.
Henri Joseph Thomas was born in Sint-Jans-Molenbeek in June 1878. He studied at the Académie Royale des Beaux-Arts in Brussels from 1895 until 1898 and started a studio in Brussels afterwards, where he mainly worked as an illustrator of avant-garde books. He also specialized in marine paintings, floral still life paintings and portraits of elegant ladies. He eventually started his career with the presentation of a Vénus de bar at the Godecharle contest in 1909. His expositions in the Belle Époque include those at the Cercle Artistique et Littéraire in Brussels in 1906, 1909 and 1921, and in the Société Nationale des Beaux-Arts in Paris in 1906 and 1910. Thomas was a member of the Labeur society for fine artists that organised annual expositions for its members in the Museum of Modern Arts (Musée Moderne) in Brussels between 1898 and 1907.

He often depicted night life scenes in bars and portraits of ladies, with suggestions of decadence, temptation, adultery and prostitution in the poses of his women.His paintings of elegant women date mainly from the Belle Époque and interbellum. In his painting of luscious women he was a follower of the Belgian painter and etcher Félicien Rops.

Henri Thomas illustrated several books with his drawings and etches. This already started just after he ended his training when in 1898 he contributed 40 illustrations to the gay-erotic book L'Homme-sirène by Louis Didier who worked under the pseudonym Luis d'Herdy. In 1909 La muse (the muse) was published in a Au claire de la dune, a collection of poems by the Belgian poet Théo Hannon. He later illustrated a collection of erotic poems, La toison de Phryné published in 1913 by Théodore Hannon, with 11 engravings, of which two were in colour. He also illustrated Du coeur aux lèvres by Lucien Solvay and Les Diaboliques (the She-devils) by Jules Barbey d'Aurevilly Some of his engravings also appeared in the fourth (1926-1927) and eight (Volupté, 1935) series of La Gravure Originale Belge (Original Belgian Engravings). This series consisted of 11 paper portfolios of about ten original engravings signed by the artist that were published for subscribers in limited editions by the Comité de La Gravure Originale Belge between 1924 and 1939.

Henri Thomas lived in Brussels at Rue Hydraulique 44 around 1907 and moved to Rue du Berceau 28, where he lived during the interbellum. He died in Brussels on 22 November 1972.