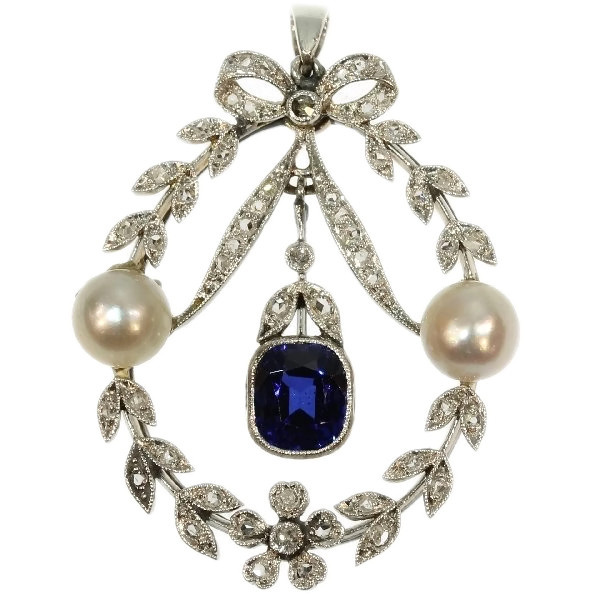 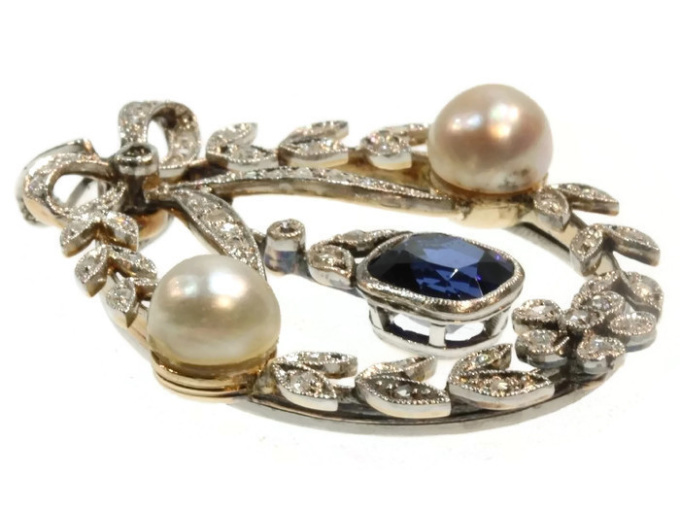 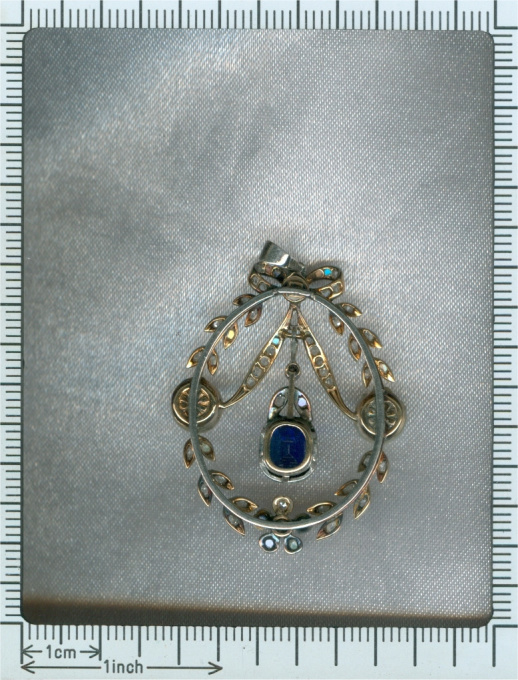 Truly suitable in the Belle Époque period -also called the "garland-style", this antique platinum wreath pendant is encrusted with 51 rose cut diamonds and has a stunning lab produced cushion cut sapphire topped by a pair of leafs and a single brilliantcut diamond dangling from an adorable bow with a single brilliant cut diamond knot. Its two ribbons guide you to the pearls on each side of the garland, which sprouts as an oval from the knot to a bottom flower with five heart-shaped leafs and a singlebrilliant cut diamonds as its heart.

Style specifics: The Belle Époque (French for "Beautiful Era") was a period in European social history that began during the late 19th century from the Franco-Prussian War (1870-1871) and lasted until World War I (1914-18).

Theme: Wreath - A wreath is an assortment of flowers, leaves, fruits, twigs and/or various materials that is constructed to resemble a ring. Wreaths have much history and symbolism associated with them. They are usually made from evergreens and symbolizestrength, as evergreens last even throughout the harshest winters. Bay laurel may also be used, and these wreaths are known as laurel wreaths.

The use of wreaths varies by culture, tradition and religions. In Christianity, it is used to prepare for Jesus’ birth and in many cultures around the world, wreaths are used in weddings as a headdress. The history behind wreaths dates back thousands ofyears and much of the symbolism lies with Greek mythology.

In the Greco-Roman world, wreaths were used as an adornment that could represent a person’s occupation, rank, their achievements and status. The wreath that was commonly used was the laurel wreath and became associated with what Apollo embodied; victory, achievement and status and would later become one of the most commonly used symbols to address achievement throughout Greece and Rome.

The Romans use of laurel wreaths echo the Greek traditions. The wreath was a symbol in the arts, literature, government and education in Roman society. In the arts, it expressed that one was valued and respected with a laurel wreath resting atop one’shead. Kings in both Greece and Rome donned the laurel wreath to illustrate sovereignty. Julius Caesar for example, proclaimed the laurel wreath "to be a symbol of the supreme ruler." The wreaths worn by kings were reminiscent of the traditional laurelwreath by the shape and its connotation yet were embellished with gold and gems. This eventually led to the modern day crown. (from: Wikipedia)

Diamonds:Three single brilliant cut diamonds (also called 8/8) with a total estimated weight of approx. 0.06 crt.and 51 rose cut diamonds. We do not have the weight of the diamonds which is normal in our trade when it comes to rose cuts.