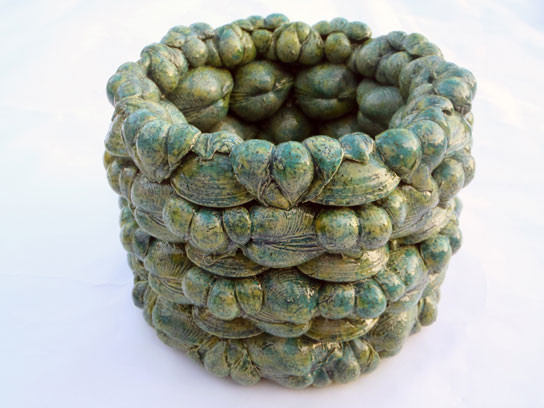 Van Leeuwen creates strikingly baroque objects, made up of many small prints of shells and fruit, which remind of the curio cabinets that were in fashion in the 17th century and admired by her.

It was in vogue among the wealthy merchants of that era to collect new types of fruit and shells that were brought back by the VOC ships, in such cabinets.

Van Leeuwen uses shells and fruit to make plaster press moulds, which are then used for producing large quantities of prints. From these prints she creates her objects, always using the pot or dish shape as a basis. Her objects are flawless both on the inside and outside, a ceramic tour de force.

She uses dishes and pots with lids as her base shapes. In addition, she creates combinations of ceramic "garnitures", which were also common during the 17th century. As with her earlier objects, the prints in the new series of covered jars and dishes are not merely individual components; rather, they appear to be following a playful pattern, which precisely through repetition of the individual shapes acquires its immense effect.

After having graduated in crafts and textile art from the Teacher Training College, Van Leeuwen, born in Rotterdam in 1965, transferred to the Ceramic Design department of the Rietveld Academy. During her studies she was given the opportunity to undertake a work placement with the European Ceramic Work Centre (EKWC) in Den Bosch.

Following her graduation in 1993 she took part in countless solo and group exhibitions within the Netherlands and abroad. She also received an honourable mention in Faenza.