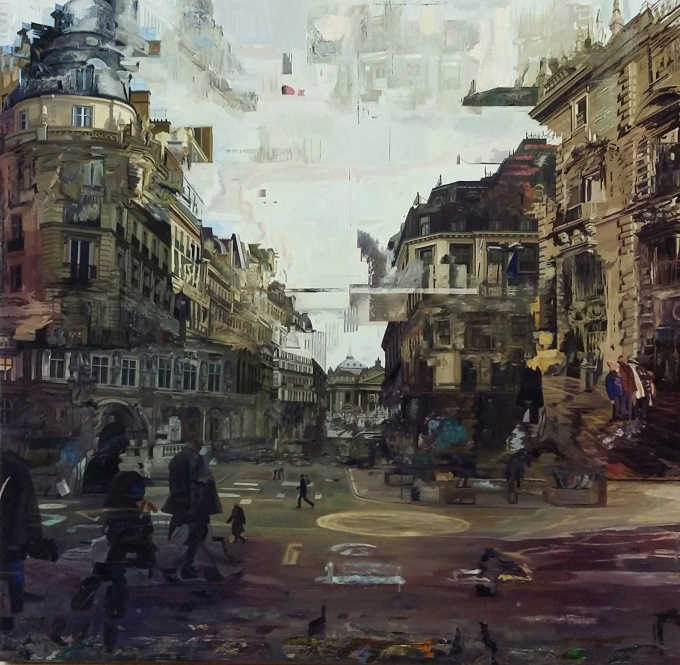 You can lease art tax-efficiently from us. Please contact us for more information.

Rodion Petroff (born in 1985) lives and works in Klaipėda city. In the year 2011 at Vilnius Academy of Arts he achieved Master's degree of Fine Arts. Years 2011/2013 – the winner of the biennial „Young European Creators (orig. JCE)“; years 2012, 2013, 2014 – the  finalist of „Young painter's prize“. From the year 2013 – the member of Lithuanian Artists' Association. He has organized 10 personal exhibitions and has participated in more than 30 group exhibitions in Lithuania, Germany, Poland, Holland, Sweden, Norway, Belgium, France, Italy, Spain, Portugal, Austria, Russia, Hungary, Slovakia and China.

In years 2017/2018  R. Petroff has earned the scholarship of Klaipėda city municipality.

Some of the newest works from the cycle „Noise“ were exhibited at European Contemporary Artists Exhibition „Déjà vu“ that took place in an art district 798 in Beijing (China) and at one of the largest contemporary art exhibitions in Europe called „NordArt“ (Germany).

”Rodion Petroff’s works is defined by the context and technique of his paintings. His realism is to be seen as a tool rather than as a goal. Recognizable urban landscapes as well as the normal social action of the figures in the scenes creates the illusion of daily routines. His architectural landscapes are a key to the past dressed in a historical code. The city is an artificial system created by a humans taking different shapes and forms in different times. The future is perceived through the prism of the past, and reflecting on old buildings helps us to rethink the past and to create a basis of the future.

In Rodion Petroff’s series of paintings titled ‘In Search of the Past’, the urban landscape is clearly apparent, with a composition similar to classical architecture where certain elements and approximate symmetry frequently appear. The themes of the paintings are chosen intuitively and the artist is often attracted by the two extremes of intensive movement and its total absence. The places of tourist pilgrimages depicted encourage viewers to compare the past with the present in the visuality of architecture.
The artist considers the architecture depicted in his paintings as a cultural, historical code and as a constant in the context of time. The artist uses hyperrealism as reality which can be expanded upon in terms of meaning by the viewer. In some paintings you can clearly see the specific metaphorical sense where the static scenery interrelates with the scenes of intense movement and which constitutes the theme as a whole.”