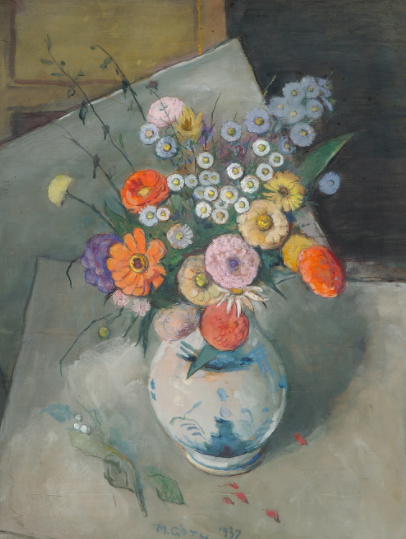 Maurice Goth (1873, Avdo Felsofalu, Hungary – 1944, Amsterdam), also spelt Moricz Góth, lived and worked in Munich, Paris, Brittany, Bruges, Budapest, Domburg, Veere and Amsterdam. He attended the Drawing Academy in Munich, the Académie Julian in Paris and the Academy of Vienna. He was the father of the painter Sarika Goth. He drew and painted - also in watercolours – beaches, harbours (Zeeland), flowers, portraits, figures, animals (horses) and landscapes in an impressionistic style. Besides a painter and draughtsman, he also was a sculptor. He was awarded the Hungarian Prix de Rome and received several other honours. Goth was a member of Arti et Amicitiae, Amsterdam. His works are included in the collections of the Haags Gemeentemuseum, The Hague; the Centraal Museum, Utrecht, and the Drents Museum, Assen.