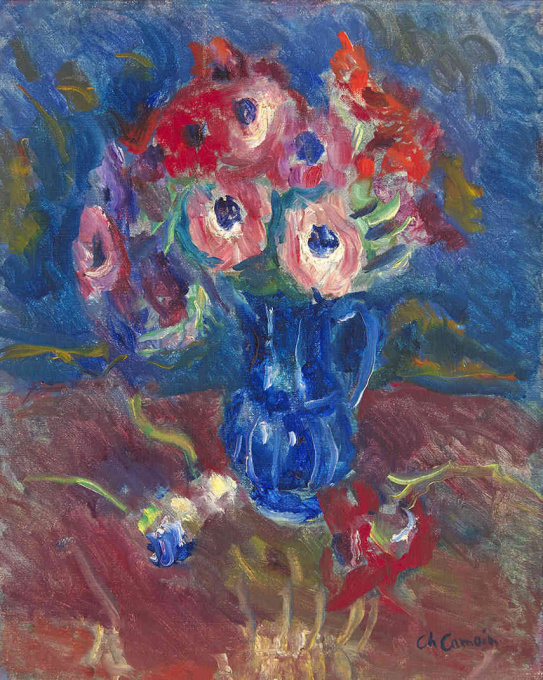 Charles Camoin was born in ‘a pot of colour’ states Daniele Giraudy in her book Camoin Sa Vie Son Oeuvre. His father had a paint- and decorationshop in Marseille. After his father died when he was six, Camoin and his brother and two sisters grew up with their mother in Paris. At the Ecole des Beaux Arts, he became friends with Henri Matisse and Albert Marquet. In the year 1902 Camoin made acquaintance with Paul Cezanne, whose influence remained important during the whole of his career. In 1905 his work was to be seen in the historic Cage aux Fauves of the Salon d’Automne where all important modernists of the day such as Matisse, Derain, De Vlaminck and Van Dongen were represented. Later on in his career, Camoin abandons the broad brushstrokes and strong colours of fauvism in favour of a more gentle painting in a tempered palette. Camoin’s work is represented in major public collections all over the world such as the Nationalgalerie in Berlin, the Museum of Modern Art in New York and the Musee National d’Art Moderne in Paris.

Charles Camoin (23 September 1879-20 May 1965) was a French painter, born in Marseille. There he got to know Henri Matisse in Gustave Moreau’s class at the École des Beaux Arts in Paris. He joined the Fauves, a group of expressionist artists including Matisse, Camoin, André Derain and Maurice de Vlaminck. Camoin always remained close to Matisse and painted a portrait of him, which can be found in the collection of Centre Pompidou in Paris. Camoin’s works are exhibited throughout France and included in major collections like Musée d'Art Moderne de la Ville de Paris and Centre Pompidou. In 1955 he was honoured with the Prix du Président de la République at the Biennale of Menton. He died on May 20, 1965.