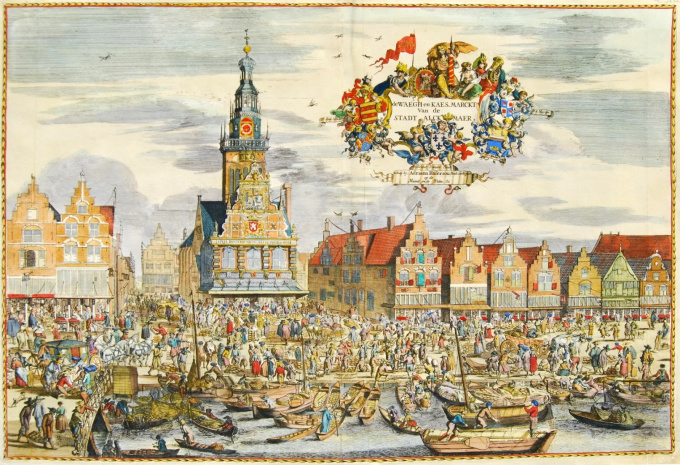 Activity at the Waag and Kaasmarkt, in the foreground the cheeses are delivered by boat. The left house passed the bridge, "de Witte-Os" on the Mient, is from bookseller A. Hafersou where this print was for sale.

Animal husbandry was an exceptionally important industry in North Holland. After draining the lakes, the polders proved to be less suitable for agriculture, but for animal husbandry. In many cities in this area such as Alkmaar, Purmerend and Edam the cattle and cheese markets flourished.

Alkmaar was in 1573, the first city in Holland to resist a siege of the Spaniards. As a thank you for that, the city was given the right to hold a cheese market in 1581 of the States of Holland. The former Holy Spirit Chapel was then converted into cheese weighing. From that day in Alkmaar, the cheese was traded every year from May to All Saints' Day on Fridays and Saturdays.

In 1673 Romeyn married Maria Lansman, the daughter of a minister. They lived in Amsterdam on the Reguliersgracht. He illustrated books, for example Hieroglyphica of Merkbeelden der oude volkeren (1735), a well known emblem book and sourcebook for classical mythology and its iconography. He also illustrated books of Constantijn Huygens and Hugo de Groot. In 1675 he owned an art store in the Kalverstraat.

In 1677 he illustrated Coenraad van Klenck’s trip to Moscow. He produced many etches, among others the ﬁreworks on the Hofvijver in the Hague. A number of De Hooghe’s etches were disapproved by some people, since they would show shameful subjects. On the other hand he was esteemed as a great graphic satirist. De Hooghe was a propagandist of the anti- French politics. He painted large panels for the rooms of the mayor’s ofﬁce in Enkhuizen. In 1690 he moved to Haarlem, where he started lessons in pattern drawing for children on the Nieuwe Gracht 13.