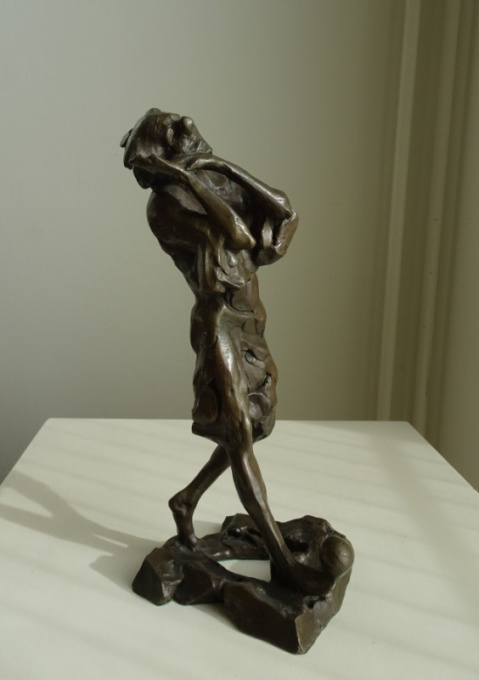 Korstiaan Verkade, known as Kees, was born in the Dutch city of Haarlem in 1941. As a child he was already passionate about drawing and he dreamt of working in the advertising industry. Because of the encouragement of his parents, we know of a number of Cubist-like still lifes, dated 1955. The Gerrit Rietveld Academy in Amsterdam refused to admit Verkade because of his father’s position as a Director of a mattress factory: the family was too fortunate.

Verkade’s talent was recognized by Aart van Dobbenburgh (1899-1988) who was teaching at the Royal Academy in The Hague. Due to a lack of available places in the field of commercial art after which he could join the advertising classes, Verkade was told to spend a year in the sculpture department; a happy coincidence. During his first year, he was taught to use materials to which he would remain loyal: black wax and clay. Verkade’s first figures were of favoured subjects as animals and people. The sculptures seemed to form themselves spontaneously in his hands, but a more abstract style of one of his teachers remains visible in his work. During his training period, Kees learned the details of bronze casting and made the process his own: he prefers to give an own finishing to the final patina. Verkade was granted the Esso Prize of the Academy of 500 guilders. Verkade borrowed his father’s red Mercedes for transportation of his winning pieces. Because of this, it was decided that Verkade did not deserve the price money of 500 guilders. This gave him strength to go forward. His first exhibition took place in the Vishal in Haarlem in 1964, followed by a second expedition in the Vleeshal. He was invited to show his works in a number of well-known galleries.

His first monumental commission by Haarlem authorities was Stadten in 1966, a depiction of two older women going shopping. His career really took off when American photographer David Douglas Duncan discovered his work at an art market in Haarlem in 1969. In 1970 TIME Magazine devoted an entire article to ‘the shy Dutch artist’ entitled ‘The Hottest Underground Sculptor’. From then on, commissions flooded in and Verkade’s fame spread quickly. His figures grew thinner, the body fat seemed to have dissolved. In ’71 he was invited to exhibit his work at the Galerie André Weil in Paris for the first time. The sales and commissions gave him financial stability.

His figures continued to become leaner and more fragile, encapsulating elements as intimacy and security. Verkade often stayed with his American friends in the South of France and Monaco during this time; the places were to be of great influence on him. Many works by Verkade are to be seen when wandering around the Principality of Monaco. Later in his life he tended to reflect the expression of his sculptures in the specific twists and turns of the body. After several years of renewed creations, Verkade returned to his original style of full bodies.