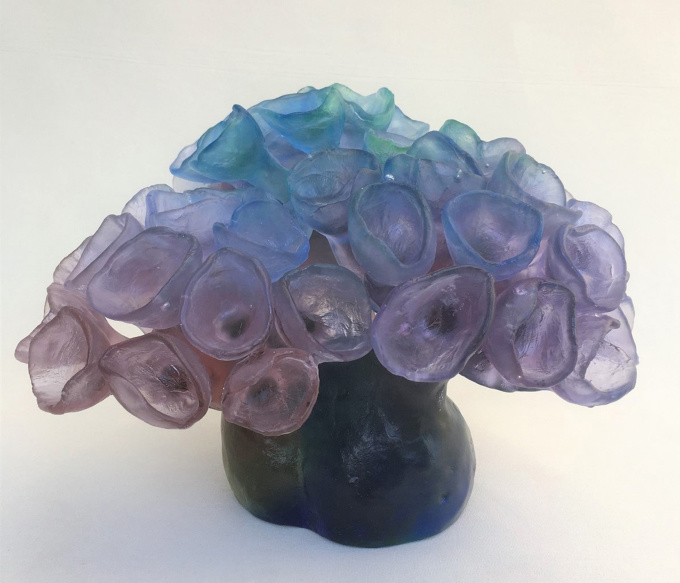 Hanneke Fokkelman was born in Rotterdam in 1955.

She is known for her works of glass art, inspired by Lino Tagliapietra, her master.

Nature is a regular theme in Hanneke Fokkelman's work.
Of all the glass techniques in which she is proficient after so many active years in this field, she is currently most fascinated by the endless possibilities of the pate de verre technique.

In this method, she says that she feels that she can control the qualities of glass, the colour and colour variations and the texture to her own satisfaction. Each object is a new adventure and inspires the next, evokes dreams to a world of floral shapes and sea creatures.
It’s a wonderful world of glass.


After her teacher training, Hanneke Fokkelman became interested in glass. So she went to work in "De Oude Horn", Willem Heesen’s glass studio, and at the same time studied glass at the Gerrit Rietveld Academy.

In 1987 she left "initially for 1 year" - for the CIRVA in Marseilles, one of the largest glass studios in the world that works mainly on commissions by artists. She ended up staying there until 2001 and became head of the glass studio, where artists from other disciplines can have work made.

This brought her in touch with many aspects of glass. This is clearly reflected in her use of a range of techniques; as a result her work continually displays new perspectives.
Since 2001 she has had her own studio in the South of France, where she recently started making ceramics again, the technique in which she graduated as a teacher. She also combines glass and ceramics.