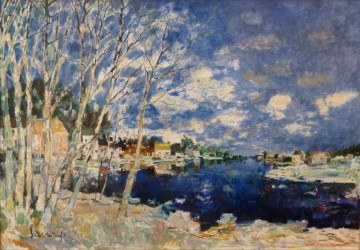 Painted in the blue period around 1930

Albert Saverys was one of the leading Belgian painters of the Interbellum.
He is often regarded as a follower and imitator of the famous generation of Flemish expressionist artists. This is largely because he was mostly known for his many variations on the landscape surrounding the Lys, which he painted from 1935 until his death in 1964. In hundreds of watercolours and oil paintings from that period he depicted the Lys landscape, playing with the colours of the changing seasons. Already in the 1920s, however, he developed a very personal and expressive style of painting that is clearly distinct from the work of Gust. De Smet, Constant Permeke and Frits Van den Berghe, whose work was then reaching full maturity. This in-depth collection study primarily focuses on the adventurous way in which Saverys experimented with painting in the period 1924-1934.

His artistic career began in the 1910s, with works in the impressionist tradition. In those years, Impressionism was still very fashionable in Belgium, mainly due to the success of Emile Claus. From 1919, the oeuvre of Albert Saverys will however develop in many interesting ways. This occurs under the influence of his friends and contemporaries Constant Permeke, Gust. De Smet and Frits Van den Berghe, all of whom discover the Dutch and German expressionism while abroad during WWI. Albert Saverys stayed in Deinze during the war years (1914-18), but will eventually also discover and start to work in the expressionist style of painting.

From 1919, in a series of still lifes, portraits and landscapes, Saverys experiments with paint, colouring and composition, without seeking easy or effortless painterly solutions. The ever-changing way in which he will from then on deal with colour and brushwork evidences both his tentative searching and his virtuoso abilities. It is not only the rural area of Deinze that inspires him, but also the sea, the fisherman's life, the city, ... Between 1925 and 1930, for example, he paints several still lifes with fish, but also a number of fisherman portraits. His brushwork is impulsive and he creates compositions in which he introduces ‘tilting’ perspective lines that eschew realistic representation, yet seek to depict a dynamic force while also emphasising the rugged nature of the depicted subject.