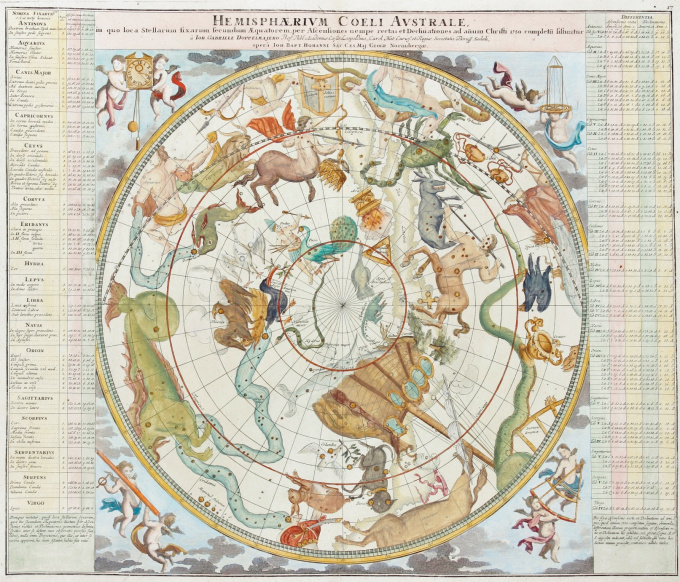 The constellations - including Libra, Aquarius, Sagittarius, Pisces, Southern Cross - are depicted according to the Polish astronomer Johannes Hevelius, but we also see more exotic constellations such as Pauw, Toekan and the river Eridanus.

Doppelmayr (1677-1750) was a professor of mathematics at Nuremberg and wrote about astronomy, geography, cartography, trigonometry, sundials and mathematical instruments. Homann (1664-1724), a former Dominican monk, was the most important and productive German cartographer/publisher of the 18th century and produced maps and globes that stood out both due to their geographical accuracy and exceptional aesthetics.

Johann Baptist Homann (1664, Oberkammlach – 1724, Nürnberg) was born in Oberkammlach in ‘Landkreis’ Unterallgäu (Bavaria). He was educated at a Jesuit school, but converted to Protestantism.

From 1687 he was a notary in Nürnberg, but he soon decided to become an engraver and cartographer. In the period from 1693-1695 he stayed in Vienna, afterwards he returned to Nürnberg where he founded his own publishing house in 1702. Homann acquired fame as cartographer and was appointed Imperial Geographer by emperor Charles VI in 1715. He also was named a member of the Prussian Academy of Sciences in Berlin.

In 1716 Homann published his celebrated work Grosser Atlas über die ganze Welt (Grand Atlas of all the World). Many maps were drawn along with the engraver Christoph Weigel the Elder.