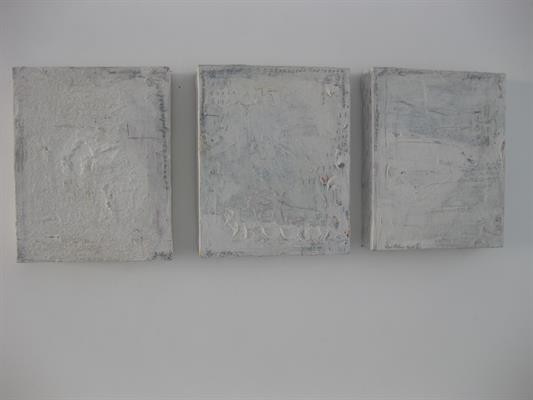 Dov Shlein (1936, Chernowitz, Ukraina) emigrated with his family to Israel in 1950. He studied Jewish and general history at the University of Haifa. In 1970 he moved to London, where he had his arts education at the Camden Arts Centre from 1973 to 1976. In 1976 he returned to Israel. Here he worked as an artist but also was a teacher at the Hassada Community College Academy and at the Lycée René Cassin. Since 1982 he has been living in Amsterdam as a visual artist. He had several exhibitions in Amsterdam, Delft and Haarlem. The Teylers Museum, Haarlem, purchased three of his works.

‘Dov Shlein creates an amazing world in signs, images and letters, a world which wants to be “read”. Time and again one discovers new layers in the representation, sometimes litterally, as all kinds of materials are used one over the other in the composition.’
(E. Ebbinge and M.A. Menalda, director and curator respectively of the Teylers Museum, in Teylers Magazijn nr 67, 2000.)

‘The surface has been roughly treated. In many places, the paint is grated, rubbed off, and has been scratched; the paint shows long and deep marks. Sometimes, this has been done with such strenght, that the canvas is damaged, the paint crumbled. This gives the rough surface a semblance of ploughed earth, as if a cross farmer ploughed his land too wildely... again and again the substratum gets through the narrative. This way of working guarantees a thoughtful and intimate character to shlein’s work.’ (Monica Aerden in haarlems dagblad, 1999.)

‘The main source of his inspiration is formed by memories from his youth... the artist transforms these feelings into one colour, often yellow or white... “My work is a veiled autobiography, in which my history is presented as in an abstract recording.”’
(birgitta van blitterswijk, art historian, in omanoet modernit, 1997.)