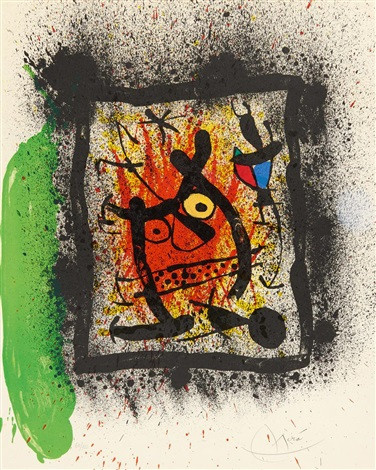 taught about modern art movements and introduced to contemporary poets. Between 1912 and 1920 Miró painted nudes, still lifes and landscapes. During this perios Miró developed an interest in the bright colours of the French Fauve painters and the fractured compositions created by the Cubists.

Miró held his first solo show in Paris in 1921, which unexpectedly was a complete failure and he didn’t sell a single work. Determined as he was however, Miró participated in the first Surrealist exhibition in 1925, collaborating with the group’s members creating larger commissions. He first worked with Max Ernst in 1926 on the creation of Sergei Diaghilev's ballet set designs.

In 1929, having a flourishing career by now, he married Pilar Juncosa. A few years later his work was exhibited in both France and the United States. When the war broke out Miró and his family were forced to flee to Mallorca.

Miró’s first retrospective was held at the MoMA in New York and was a great success. This continued to grow both in Europe and America. He incidentally inspired a generation of American artists, the Abstract Expressionists, with his simplified forms.

Dividing his time between France and Spain in the 1950s, Miró had begun working on a larger scale, both on canvas and in ceramics. At the end of the 1950s Miró along with Salvador Dalí, Enrique Tabara, and Eugenio Granell participated in Homage to Surrealism, an exhibition in Spain organized by André Breton. He continued to break away from his own patterns in the 1960s.

Throughout his life Miró continued to receive many accolades and public commissions. He received an honorary degree from the University of Barcelona in 1979. Miró died at his home in 1983.