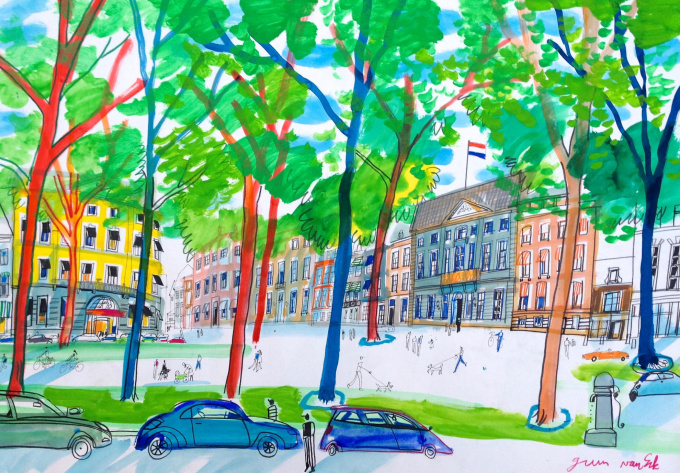 The painter Guus van Eck (1958) studied in Maastricht at the Fine Arts Academy and the Jan van Eyck Academy. After completing his training he left The Netherlands to make his home in Italy. Van Eck has a distinctive, original style. His work is open, bright and colorful with intimate images and details tucked away in richly exuberant scenes. One never tires of looking at the delightful pictures, always discovering new movements, new components and new surprises.

The Dutch artist Guus van Eck was born in 1958. He studied in Maastricht at the Fine Arts Academy and the Jan van Eyck Academy and moved to Italy after his graduation to put his painting skills into practice.

Van Eck always carries a sketchbook, in which he produces studies of his visual and mental experiences. After preparing himself this way, he closes his sketchbook and paints his gouaches and oil canvases from imaginations. His studio is known to resemble a children's room, due to his many pencils, brushes, scraps of papers and drawings which are scattered everywhere.

He produces his famous city views with gouache paint, onto either paper or canvas. He usually works sitting on the ground, setting up his composition with a big brush, in a bright and colourful handwriting. At later stage, he works on details with colour pencils. Van Eck often works in series, in which he allows his works to compete among themselves, only making the most interesting ones available at will.

His subjects of preference are cityscapes, Sicilian motifs, Greek vases and patterns, and the general landscape.