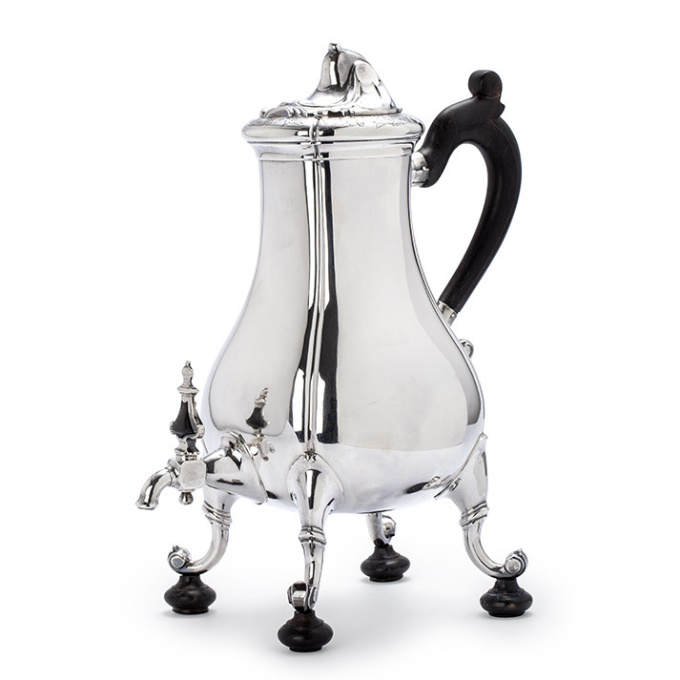 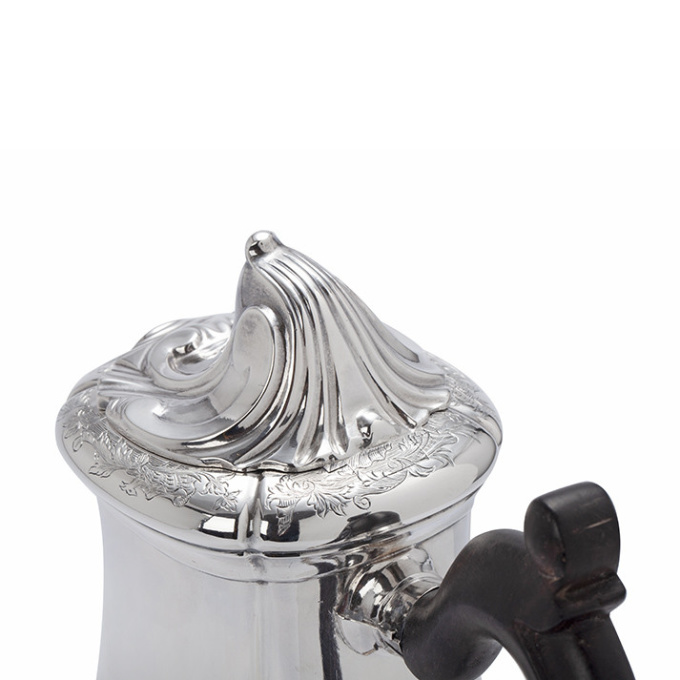 The baluster-shaped body, divided into four panels, is placed on four scroll feet, resting on wood knobs. The bent spout below is fitted with a detachable wood-inlaid tap. The hinged lid is moulded in the shape of a wave and its border is engraved with rocaille. The scroll wood handle terminates in a silver scroll below. Fully marked at the reverse and displaying assay stripes.

A kraankan or kraantjeskan (with three spouts) is actually a coffee urn, which was developed at the end of the 17th century to meet the increasing demand for coffee. Initially it was used in public ‘coffee houses’, but it appeared to be very suitable for private use as well. The so-called coffee drab remained in the belly of the urn, after the coffee had been tapped. The baluster model remained en vogue way into the 19th century, usually made of pewter, but also in silver, serving as a status symbol.

Alger Mensma (Leeuwarden 1682- Leeuwarden after 1757) apparently went to Amsterdam, where he married Elisabeth Steenstraat in 1709. In 1710 he became poorter (burgher) of Amsterdam and became a member of the Amsterdam silversmiths’ guild. His father Nicolaas Mensma worked as a silversmith in Leeuwarden and undoubtedly Alger will have received his training from him. After his second marriage to Sara van der Weide in 1730, the couple lived at Buiksloot. From his remaining works it can be concluded that Alger Mensma received many important commissions. For example, in 1731 he made a huge silver cooler, commissioned by the Admiralty of Amsterdam, donated to Captain Cornelis Schrijver. In 1732 this same captain was given a large silver fountain, made by Alger Mensma, who received this commission from the Dutch East India Company (VOC). Both objects form a set, which is now in the collection of the Rijksmuseum in Amsterdam.