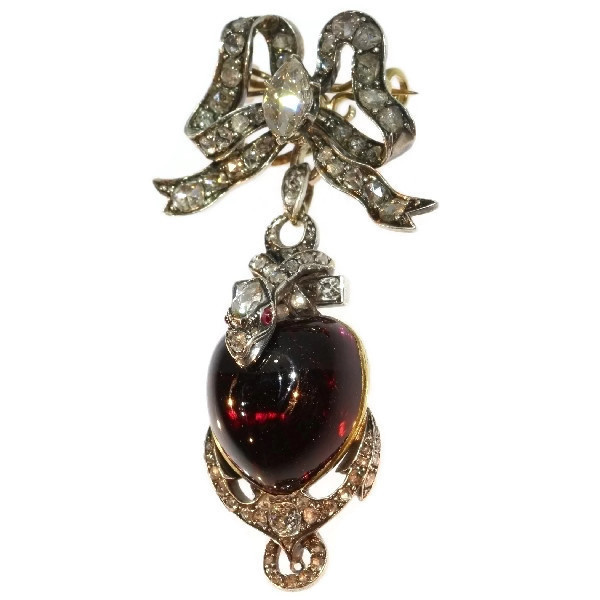 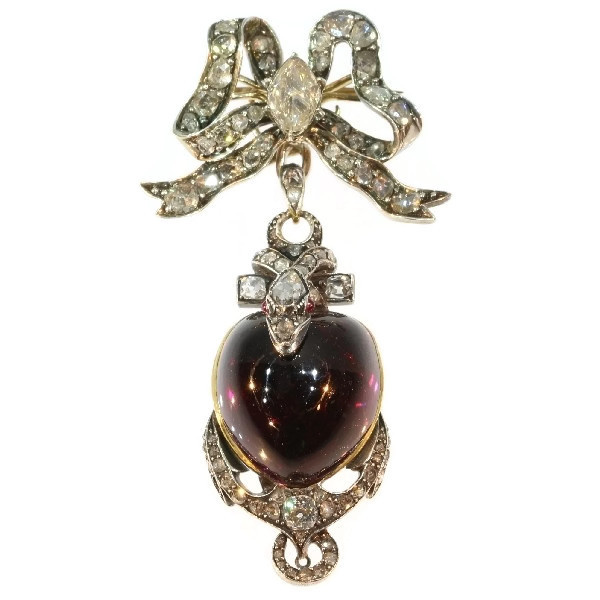 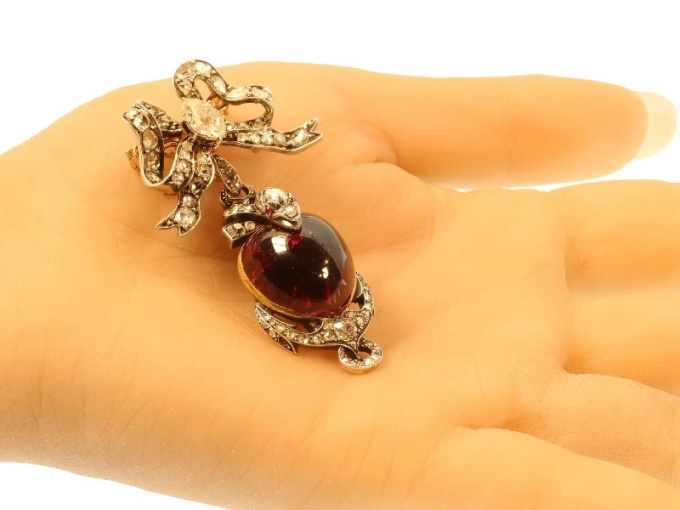 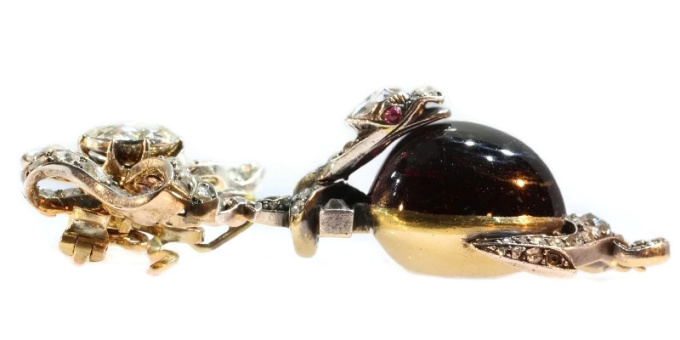 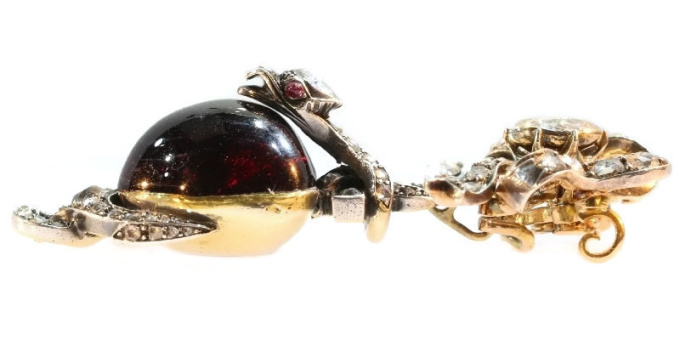 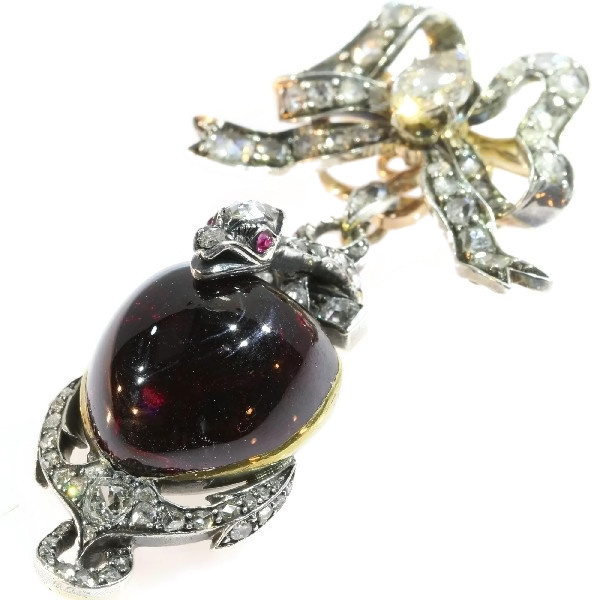 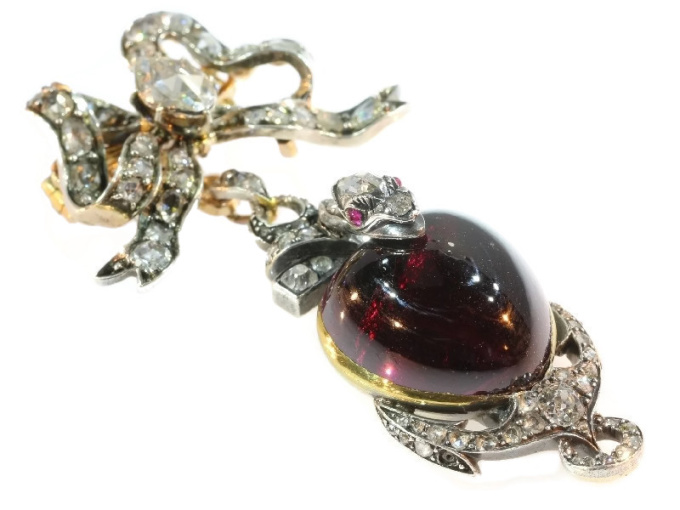 This Early-Victorian bi-colour gold-backed pendant from 1830 embodies a treasure of symbols through a deep pink garnet heart, a silver-topped bow, snake, cross and anchor encrusted with three European cut diamonds and with a total of 86 rose cut diamonds set in foil.

While the ruby-eyed snake wraps around the cross, its head emerges to the centre of the garnet and emphasizes the opulent heart-shape. This meaningful composition reveals the snake's role of protection, wisdom, hope and fertility when it comes to matters of the heart from deep within the garnet's core.
This gemstone of love is topped by a cross which extends from behind the garnet into an anchor, resulting in an Anchored cross or also called a Mariner's cross. Generally signifying hope, this bejeweled imagery contributes even more to the message ofpromise and faith in this jewel.
To complete the message of hope and tenderness, the above-mentioned piece with a 14K yellow gold back dangles from an adorable bow-knot with an 18K red gold back which literally depicts the strong bond of love. This bow particulalry grants you thepossiblity to even wear this extraordinary jewellery piece as a brooch.
For more information, please look below at the chapter with "Extra information".

It couldn't be more clear from the craftsmanship and the total design that this jewel doesn't just speak of promises and fairytales, but it truly achieves to convey the message of love.


Antique jewelry object group: combined brooch-pendant (the pendant can be taken from the bow, so both can be worn seperately too.

Style: Early-Victorian - Victorian decorative arts refers to the style of decorative arts during the Victorian era. The Victorian era is known for its eclectic revival and interpretation of historic styles and the introduction of cross-cultural influencesfrom the middle east and Asia in furniture, fittings, and Interior decoration. Victorian design is widely viewed as having indulged in a regrettable excess of ornament. The Arts and Crafts movement, the aesthetic movement, Anglo-Japanese style, and ArtNouveau style have their beginnings in the late Victorian era.
-  See also: early-Victorianor more info on styles

Source of inspiration: Symbolism (for snake and anchor)

Material: Silver on top and backed with 18K red gold (on bow) and 14K yellow gold (on anchor) (see explanation on silver on gold).
-  (more info on precious metals)

Technique: The rose cuts and the cabochon garnet are set on foil. This is a special technique that was used to bring the lustre of the diamonds to its best quality.

Extra information: Anchor - In heraldry an anchor frequently appears on the flags and coats of arms of institutions involved with the sea, both naval and commercial, as well as of port cities and seacoast regions and provinces in various countries. There also exists inheraldry the "Anchored Cross", or Mariner's Cross, a stylized cross in the shape of an anchor. The symbol can be used to signify 'fresh start' or 'hope'. The New Testament refers to the Christian's hope as "an anchor of the soul" (Hebrews 6:19). In 1887, the Delta Gamma Fraternity adopted the anchor as its badge to signify hope. (from Wikipedia).

Snakes and serpents - Serpent is a word of Latin origin (from serpens, serpentis "something that creeps, snake", deriving from the greek word "erpo" and "erpeto", crawl and serpent) that is commonly used in a specifically mythic or religious context,signifying a snake that is to be regarded not as a mundane natural phenomenon nor as an object of scientific zoology, but as the bearer of some potent symbolic value.

Diamond(s): One old European cut diamond (just below garnet) with an estimated weight of ± 0.32ct.(colour and clarity: H/I, vs/si).
Three old European cut diamond (one in pendant upper loop ring and two in cross bar just above garnet)with an estimated weight of ± 0.24ct. (colour and clarity: H/J, vs/si).
86 rose cut diamonds. We do not have the weight of the diamonds which is normal in our trade when it comes to rose cuts.
- All diamond weights, color grades and clarity are approximate since the stones were not removed from their mounts to preserve the integrity of the setting.

Precious stones: One cabochon garnet
Two rubies (for the eyes)

Birthstones: Diamond is the birthstone (or month stone) for April, garnet for January and ruby for July.
-  (more info on birthstones)