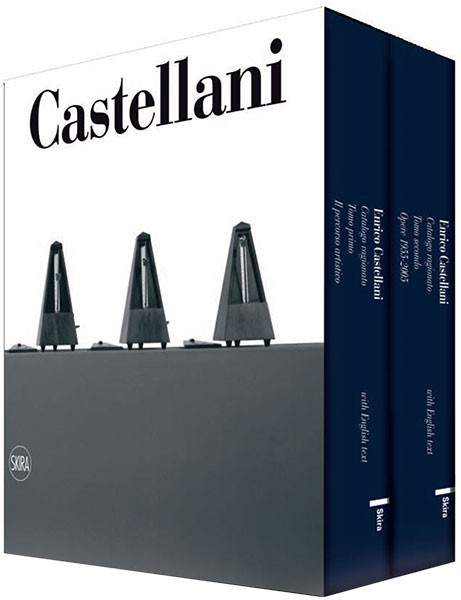 An unprecedented account of the first fifty years of work of one of the major protagonists in the history of the art world of the post-war period. Enrico Castellani (Castelmassi, Italy, 1930) trained as an artist in Belgium. In 1957 he returned to Italy and came into contact with Piero Manzoni, Lucio Fontana, Vincenzo Agnetti, Agostino Bonalumi, Yves Klein and the German artists known as ZERO that exerted an enormous influence on the Italian avant-garde. The late 1950s saw Castellanis Superficie Nera monochrome pictures on canvases he worked up with nails and a nail gun to give the surface a uniform relief texture that produced effects of light and shade through its indentations and protrusions. In the years that followed, Enrico Castellani continued to refine this technique and also experimented with other materials. In 1964 Enrico Castellani participated in the Venice Biennale. In 1968 he showed works at documenta 4. Numerous other exhibitions and distinctions followed that attest to Enrico Castellanis importance on an international scale. The General Catalogue of Enrico Castellani is structured in two volumes. The first volume includes over 200 works created starting from 1958 up to the present day, many of which published for the first time on this occasion. The initial paintings, his first surface in relief and some of the subsequent ones, the diptychs, the triptychs, the baldachins and the corner pieces, the atypical works, environments and installations. Introduced by a long essay by Bruno Corà who analyses the entire creative path of Enrico Castellani and reveals some of the most intimate and seductive aspects that characterise it and by a text by Marco Meneguzzo who tends to focus on why his work is so fundamental and competitive at international level this first book contains the main writings by the artist theoretical, polemical and political and a selection of photos forming a kind of unusual biography in images. The second volume, ordered chronologically, looks back over the first five decades of work by Castellani, who, involved directly in this fundamental reconnaissance work, has examined all the documents and images published. [ZERO]

For three generations the Castellani family created what they called 'Italian archaeological jewellery', which was inspired by the precious Etruscan, Roman, Greek, and Byzantine antiquities being excavated at the time. The Castellani jewellery consisted of finely wrought gold that was often combined with delicate and colourful mosaics, carved gemstones, or enamel. Fortunato Castellani became the first 19th-century goldsmith to create works closely modelled after classical Italian and Greek prototypes, thus creating a new fashion trend. Fuelled by patriotic feelings and a desire to educate, the Castellani pursued an ambitious goal of studying and reviving all periods of Italian jewellery.