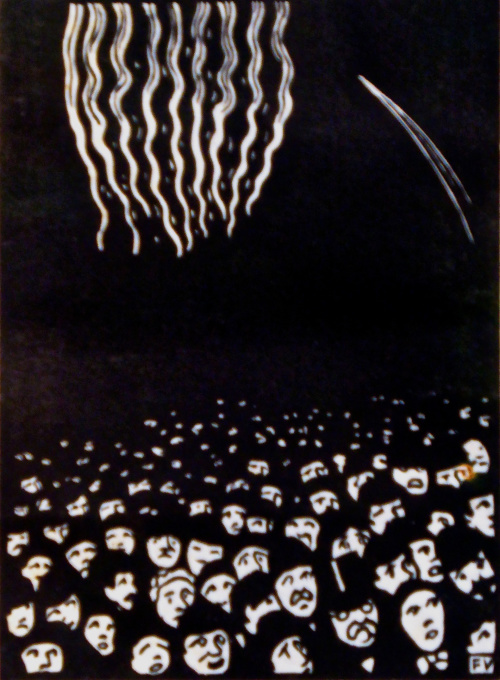 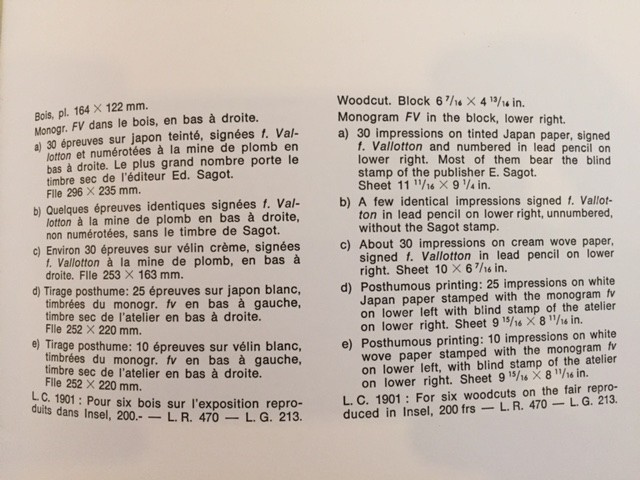 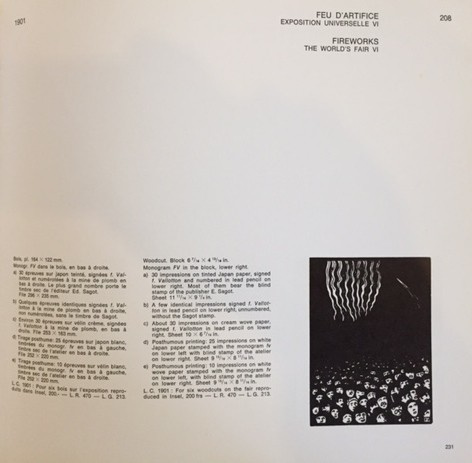 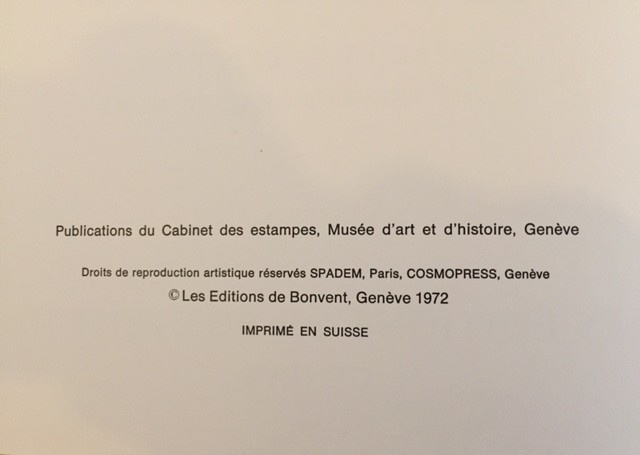 A (posthumous) woodcut, on Japan, by Felix Vallotton, "Feu d'artifice" at the "exposition universelle" in Paris. Numbered 12 (of 25 made). Signed in the block FV. This edition was edited by Vallotton's brother in Lausanne in 1930, five years after the death of Felix. (Cat. raisonné de l'oeuvre gravé et lithographié. ed.: Bonvent, Genève, 1972). Measurements framed (behind art glass): Height: 43 cm. Width: 28 cm.

Born in Lausanne, Switzerland in 1865 and obtaining French citizenship in 1900, Vallotton drew his inspiration from this double culture. Following studies at the Académie Julian and École des Beaux-Arts in Paris, he strove to make his living by painting portraits. It was however in his portrayals of Parisian life that Vallotton developed an individual style, which he changed very little afterwards. Vallotton later tried his hand at engraving, a form he soon mastered and received widescale acclaim for, his prints used in many magazines and publications of the day. Vallotton’s engravings primarily consist of large areas of black and white and are characterised by their stark contrast and acute attention to detail.

“Vallotton’s engraving reached such a level of originality that the various influences which merged within it were no longer perceptible, creating a language all of his own which no longer resembled that of anyone else. [...] It is in his engraving that the multiple aspects of his talent best reveal themselves, whether it be those of the portraitist, the draughtsman of everyday life, the decorator, or the accomplished designer.”
The artist exhibited with the Nabis for the first time at the Salon des Indépendants in 1893, where he caused a sensation with The Bath, Summer Evening. His painting evolved towards more stylised scenes which approached his engravings, a practice he turned away from in 1900. The same year, he married Gabrielle Rodrigues-Henriques, daughter and sister of the Bernheim art dealers, the marriage offering Vallotton bourgeois comforts and a solid footing in the art market.
After his scenes of Parisian life, Vallotton painted landscapes and nudes. Certain paintings, such as Man and Woman, The Rape of Europa, or Perseus Slays the Dragon, reveal a brutality, notably by the depiction of bodies in a crude light.

“Vallotton’s women have modern hairstyles and an almost clumsy manner of holding themselves, even if they are called Angelica or Andromeda. A young blonde Europa, clinging frantically to the slippery back of the bull is utterly lacking in classical grace.”
This brutality can be found in the canvasses that he painted during the First World War, a period during which he tried to convey the emotions and sentiments that the events of the time inspired in him.
"[Vallotton] painted numerous decorative panels and in 1919 he exhibited a large triptych, Mourning, Punishment for the Crime, and Hope. However, from the very outset, these attempts were doomed to failure, because it was too early to seek after a monumental reflection of war."
In the last years of his life, he retired into his shell completely, his seclusion marked by his very last diary entry: “Fortunately, there is still painting."
In those years, however, he continued to paint more than two hundred canvasses, including many landscapes of the many places he had lived and visited during his life: Lausanne (his home town), the Alps, the Loire valley, the Dordogne, Honfleur, and Normandy. During this time Félix Vallotton painted what he referred to as ‘historical landscapes’, a term denoting paintings he often composed and completed from memories of a place.
Between realism, simplified stylisation, and bitter criticism of the society of his time, Félix Vallotton was above all a tireless worker, creating more than 1,700 canvases and 200 engravings during his life.
Felix Vallotton died on 29th of December, a day after his sixtieth birthday..

More than simply just the ‘foreign Nabi’, he could also be ‘the painter who loved women.’ A Swiss protestant, Vallotton was known for his shyness and indifference. Nevertheless, his closest friends said of him that beneath the cold exterior and the secretiveness could be found a passionate man, sensual and seductive. Vallotton’s brushstroke does not try to idealise or imitate the nude according to predefined codes. His women are not dented as they were by Picasso in the same period, with Les demoiselles d’Avignon. Resolutely modern, by touch, by position, by their bodies - in a word, Vallotton’s women come to life under the painter’s brush. They do not have the modesty of a Botticelli Venus, but neither do they adopt lascivious positions like those of Schiele. In a forever-smooth and cold style, Vallotton succeeded where others failed in portraying these beautiful, melancholic and sensual women.

Source: Felix-Vallotton.com and contains extracts from Natalia Brodskaia’s Felix Vallotton: The Nabi from Switzerland. The Nabis are a group of Post-Impressionist mostly from Paris and Bretagne (end 19th century). Naabi is Hebrew / Arab meaning prophet.