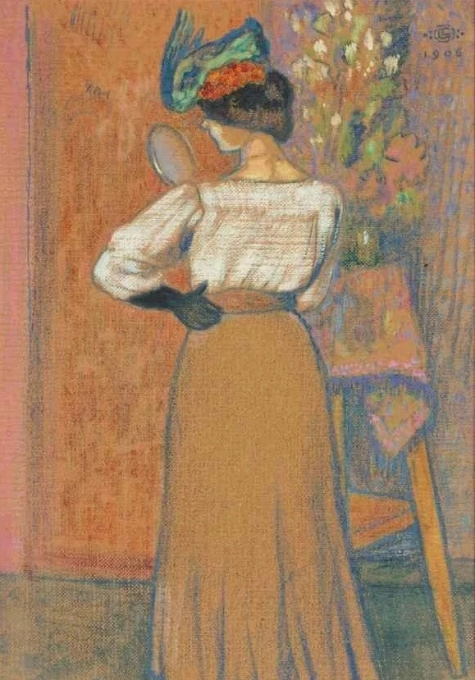 Pastel and gouache on paper
28,6 x 16,6 cm.
Signed with the monogram upper right and signed and dated lower left 'Lemmen 1906'

At the beginning of his career, Lemmen was influenced by Degas and Toulouse Lautrec. He particularly depicted subjects from the modern daily life. In 1888, Lemmen became a member of the artist association Les Vingt (Les XX), where he became acquainted with the colour theory of Seurat. He started to paint pointillist and made wonderful portraits. However, Lemmen was too much of a painter to keep working in this style and after 1900 he found a more free style with loose brushstrokes and rich colours.

Georges Lemmen was a Belgian impressionist and pointillist artist, engraver and illustrator. He studied at the school of drawing in Sint-Joost-ten-Node for a short period and in 1888 joined Les XX (Les Vingt), an avant-garde artist group of artists and sculptors in Brussels active between 1883 and 1893. In the early 1880s Lemmen became influenced by Degas and Toulouse-Lautrec and from 1890 on he moved towards Neo-impressionism, influenced by Théo van Rysselberghe, who was also a member of Les XX. Les XX was very influential in spreading neo-impressionism. Lemmen is mainly known for his landscapes, still lives, portraits and cityscapes. He exhibited at Les XX exhibitions in Brussels and at the Salon des Indépendants in Paris. By 1895 Lemmen painted more in the traditional Impressionist style instead of Pointillism. His exhibition in Brussels in 1913, a one man show, was a great success.