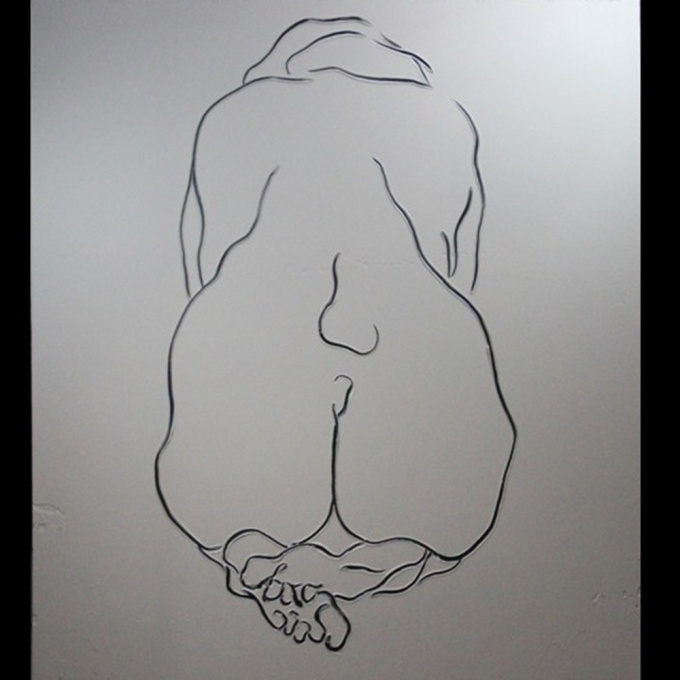 I call these works Line Paintings.
I initially draw from live models, asked to repeatedly
collapse on a small platform. Little or no direction is given other than that.
These drawings are done very quickly, without erasing, normally from left to right, looking mostly at the model and rarely glancing down at the paper.
They are exercises in observation wich push my ability to stay concentrated. I look at what I am drawing as a collection of connected lines, making up components of the figure.
The proces is comparable to rock climbing, as one handhold on a rock face leads to the next, one line or shape depends exclusively on the one attached to it. One false move or a break in concentration and the drawing is over.
From those sessions I choose drawings that hold a
particular power or intrigue for me, gestures that are both intimate and accesible, allowing for the personal interpretation of the viewer.

The surface of the wooden panel is covered with a base of black accrylic paint followed by a layer of modeling paste, leveled with a long straight edge and insised into while both layers are still wet.
The thikness of the paste and various implements used to insise into the wet surface turn drawing into a semi-sculptural process, where physical line quality and surface texture are as important as the drawing itself.

If the drawing doesnt work, the surface is scraped clean and the entire process is repeated.
Unlike in rock climbing I am able to pick myself up, off the ground, and draw again

Adam Markovic is an American artist born in Chicago in 1972.

After attending the Northeast Missouri State University where he received an education in Fine Art he moved to New York to pursue a career in painting. Here he co-owned and operated a Fine Art material store. Here Markovic produced hand-made materials for local artists based on traditional recipes derived from techniques used in creating the Old Masters.

In 2000 Markovic moved to Florence, Italy where he studied at the Charles Cecil Studios. At this institute he was given a curriculum modeled after the major Realist ateliers of the 17th and 19th century. He later became a studio assistant at the Studio. After some training he began teaching drawing, composition and the principles of the “sight-size” method.

In 2003 Markovic returned to New York where he opened “Oil and Wood”, a woodworking atelier. Here he designed and built bespoke furniture pieces which can be found in several private collections throughout New York.

In 2008 he moved back to Florence where he founded “Studio Santo Spirito”, located in the artisan quarter of Santo Spirito, focused on teaching fundamental drawing and painting techniques.

Markovic currently works and lives in Montreal, Canada. His work is represented by galleries in Italy, Belgium, Luxemburg and Canada.