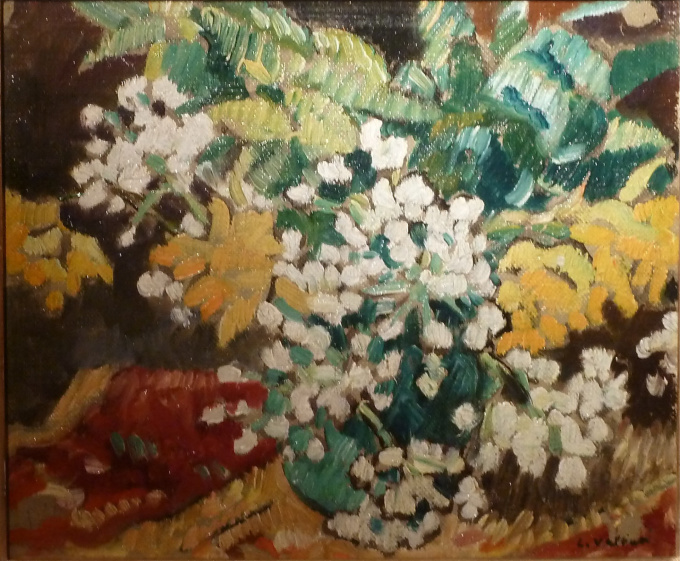 Louis Valtat was born in Dieppe August 8, 1869 and died in Paris on January 2,  1952. He was a French painter and engraver .
He studied at le Lycée Hoche in Versailles where his parents lived. In 1886, he applied for admission at the Ecole des Beaux Arts and completed his training at the Académie Julian where he made friends with Albert André and Pierre Bonnard.
In 1890, he won the Jauvin d’Attainville prize; he then set up his workshop at Rue de La Glacière in Paris. In 1893, he took part in the Salon des Artistes Indépendants for the first time. His paintings covered one main theme: the life in the neighbouring streets such as “Sur le boulevard” which Félix Fénéon duly noted.
By the end of 1894, he achieved a scenery for the theater “l’Oeuvre” in collaboration with Toulouse Lautrec and with Albert André’s help at Lugné Poë’s request. Simultaneously, his engravings and paintings were exhibited at the Salon des Cent.
As he was suffering from pulmonary consumption, he often went to Banyuls for treatment. He met there George-Daniel de Monfreid, who introduced him to Aristide Maillol.
In March 1899, Paul Signac organized a joint exhibition at 'la Galerie Durand Ruel' where Louis Valtat presented twenty paintings entitled “Notations d’Agay, 1899”.
Since the winter 1897-8, he used to spend the winter season in Agay, a small fishing village of fishermen close to Saint Raphaël and, later on, in Anthéor, a few kilometers away. He was accompanied by Suzanne whom he married in 1900.

During the same year, thanks to Renoir’s friendly recommendation, Ambroise Vollard made an agreement with Valtat, buying almost his whole production for the next 10 years.
When staying in Anthéor, Valtat often went across the Estérel, sometimes on a bicycle, to visit Auguste Renoir who rented “la Maison de la Poste” in Cagnes at that time.
During one of these visits in 1903, Renoir painted the”Portrait de Suzanne” while Valtat drew a few ink sketches of Renoir. Later on, he used these sketches for engraving on wood.
Paul Signac stayed in Saint Tropez which is 40 kilometers from Anthéor. Valtat had exchanged his painting “Le Cap Roux” for Paul Signac’s fuel car, La Bollée. Thanks to this car, the distance between the two places was easily covered during the day.
Though living far from Paris, Louis Valtat took part in the Brussels exhibition “La Libre Esthétique” in 1900 where he presented Le jardin du Luxembourg and Le boulevard Saint Michel. He was also present in 1903 at the “Gebaüde der Secession” in Vienna, in 1906 at the Kunst Salon Ersnt Arnold in Dresde, and at the Berline Secession in Berlin as well as in Budapest, Praha, and in 1908 at the Moskva Tretyakov Galerie in Moscow.
The Russian collector, Ivan Morossov bought from Vollard several pictures painted by Valtat.
Ambroise Vollard dispatched Valtat’s paintings to the exhibitions which were held in Paris. In 1905, as one of his paintings was reproduced in the magazine “L’Illustration” next to those of Henri Manguin, Henri Matisse, André Derain and Jean Puy, he got mixed up with the “Fauvism” scandal at the Salon d’Automne.
In the Spring and Summer time, Louis Valtat used to go to the seaside, particularly to paint. He liked to go to Port en Bessin, Arromanches and, later on, Ouistreham in Normandy.
Valtat with his wife would live in his parents’ house in Versailles when they were not in Anthéor or in Normandy. However, in 1905, they moved to la Butte Montmartre, at rue Girardon and place Constantin Pecqueur, respectively.
In 1914, Louis Valtat moved to l’avenue de Wagram, close to l’Arc de Triomphe and to the Bois de Boulogne whose lakes very often appeared in his work.
In 1914, Louis Valtat stopped travelling to Antheor. In 1924, after 10 years of being deprived the pleasure of a garden, he bought a house in Choisel, a small village in the Chevreuse valley. He spent the major part of the year in that place.
His garden as well as the flowers and fruits which he grew, became his favorite theme for his paintings. In Choisel, Valtat liked to host his friends, Georges d’Espagnat or Maximilien Luce who painted the village church on a visit.
By that time, he had received official recognition and was made chevalier of the Legion d’Honneur in 1927; at the 1951 exhibition on the Fauvism, which took place at the Modern Art National Museum in Paris, six of his paintings were shown among which no. 116, entitled “Arbres”. Since then, this painting seems to have gone a strange way.
After the 1940 exodus and the following years’ occupation, Louis Valtat had serious problems with his eyes (glaucoma) and seldom left his workshop located at l’avenue de Wagram, where he realized his last paintings dated 1948.