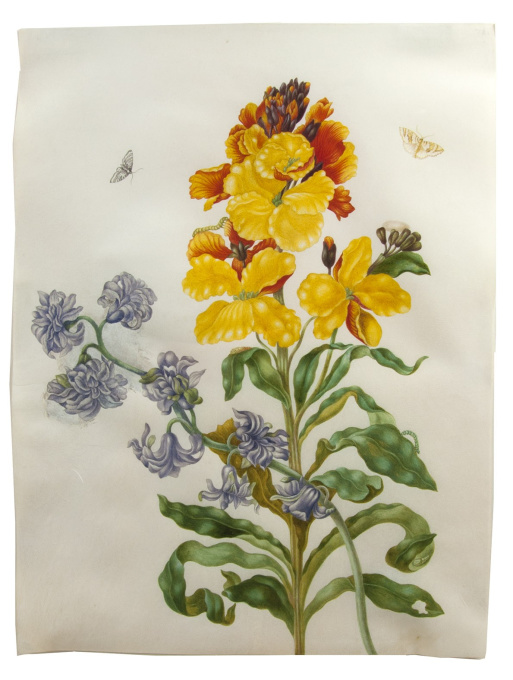 Flower watercolour with moths, larvae and pupae, by the daughter of Maria Sibylla Merian 1700

Characteristic original watercolour botanical drawing by Johanna Helena Herolt (1668-post 1721), the eldest daughter of Maria Sibylla Merian and Johann Andreas Graff. It shows a wallflower (Cheiranthus cheiri) and double hyacinth (Hyacinthus orientalis) with two inchworm moths (Geometriae) in the air, two inchworms and two pupae. She probably drew it in Amsterdam around 1700. Though she still remains in the shadow of her mother, she was a fine flower and insect artist in her own right and there is growing appreciation of her work. Her watercolours, more baroque than her mother's and often with brighter colours, radiate vigour and vivacity: the flowers, painted with intensity in every detail, really come to life.
Reitsma, p. 135, notes that the prices for the flower watercolours increased with the number of insects, so the present watercolour must have been unusually expensive. Most of Herolt's work is numbered and the present watercolour is numbered "145"[?] on the back. The published catalogues rarely note the numbers, but we understand the highest number known is 164.
Characteristic watercolour in fine state of preservation, with certificate of authenticity from Dr. S. Segal, Amsterdam. Herolt herself may have revised the upper part of the hyacinth.
Reitsma, Maria Sibylla Merian & dochters, ill. 110 (p. 147; a nearly identical drawing of the same wallflower specimen with 1 butterfly); Wettengl, Maria Sibylla Merian 1647-1717, kunstenares en natuuronderzoekster, no. 120 (ill. 44 on p. 85; a similar watercolour including the same wallflower specimen, with no insects).

According to the RKD she was the eldest daughter of the painters Maria Sibylla Merian and Johann Andreas Graff, and learned to paint from them along with her sister Dorothea Maria Graff.Though she was born in Frankfurt, in 1670 the family moved to Nuremberg, where she was raised. In 1681 her mother returned to Frankfurt without her father, in order to live with her mother after her stepfather Jacob Marrel's death. Though Johann Graff joined his family later, in 1686 Merian left her husband and moved with her two daughters and her mother to a religious community of Labadists in Wieuwerd, Friesland. Johann Graff made various attempts at reconciliation but eventually returned to Germany. In 1691 the four women moved to Amsterdam, where they set up a studio painting flowers and botanical subjects, continuing Merian's work on "The Caterpillar Book". Johanna married the merchant Jacob Hendrik Herolt, also an ex-Labadist, on 28 June 1692. They had two children and Johanna began to take on her own commissions, working for Agnes Block and the Amsterdam Hortus like her mother.

Johanna moved with her husband to Surinam in 1711 where she probably died, sometime after 1723.

A numbered series of 49 drawings signed by Herolt on vellum are in the collection of the Herzog Anton Ulrich Museum, in Brunswick.[2] This series was possibly commissioned by the Mennonite botanist and collector Agnes Block. Other drawings by Herolt are in the British Museum.[2]