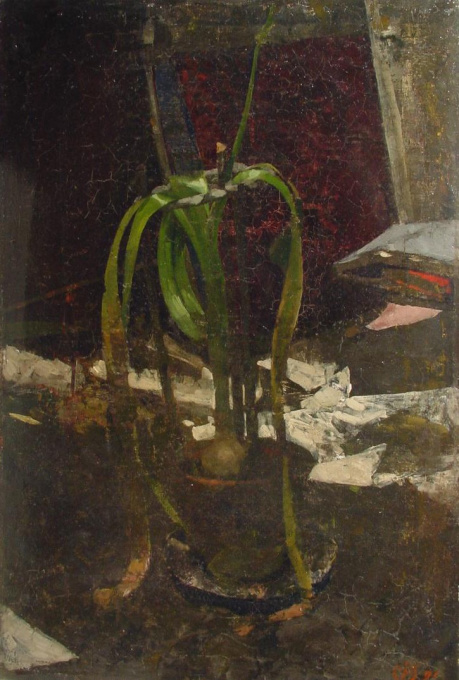 Oil on canvas, signed.
Literature: Maandblad voor Beeldende Kunst 18 1941 nr. 12, p. 327 ill.
Gerrit Willem Dijsselhof (1866 – 1924), was a Dutch painter involved in the Arts & Crafts movement.
Dijsselhof was one of the most important artists of the ‘Nieuwe Kunst’ (Modern Style). He was an all-round artist: painter, designer of furniture, textiles, wallpaper, glass, and designer of bookbindings.
For the Amsterdam physician W. of Hoorn he designed a room with wood paneling and batik wall covering (between 1895 and 1903). This room has been preserved and is since 1935 known as the 'Dijsselhof Room ' in the Gemeentemuseum of The Hague.
From 1897 he worked on furniture design for the firm E.J. van Wisselingh & Co.

Gerrit Willem Dijsselhof was born in Zwollerkerspel, on the 2nd of August, 1866. Dijsselhof was a painter and a decorative artist. He was of great importance in the field of the Nieuwe Kunst, the name under which Art Nouveau/Jugendstil became known in the Netherlands.

After his studies from 1882-1884 at The Hague Royal Acadamy of Art, he continued an education at the National School of Applied Arts in Amsterdam, during the period of 1884-1886. At this school he was known as a pupil of the modeling class. Together with other students of this class, such as Theo Nieuwenhuis, Joseph Mendes da Costa and Lambertus Zijl, he founded the association "Labor et Aartes". In the studio of Mendes da Costa, the artists were introduced to other young Amsterdam artists as Isaac Israels and Jan Veth, with whom they began to discuss the developments in the visual arts. Dijsselhof later became a follower of the ideas of William Morris and Walter Crane, the founders of the Arts and Crafts movement.

Because of a dedication to the fair craftsmanship of the movement, Dijsselhof took on the understandable job of illustrating the translation of Walter Crane's Claims for Decorative Art by Jan Veth.

After this, Dijsselhof became an all-round artist, working as a painter, designer of furniture, textiles and wallpaper, painter of glass and designer of bookbinding. For the Amsterdam physician W. van Hoorn he designed a room with wood paneling and batik covered walls. The room has been preserved and can be seen in the Gemeentemuseum in The Hague as the 'Dijsselhof Room'.